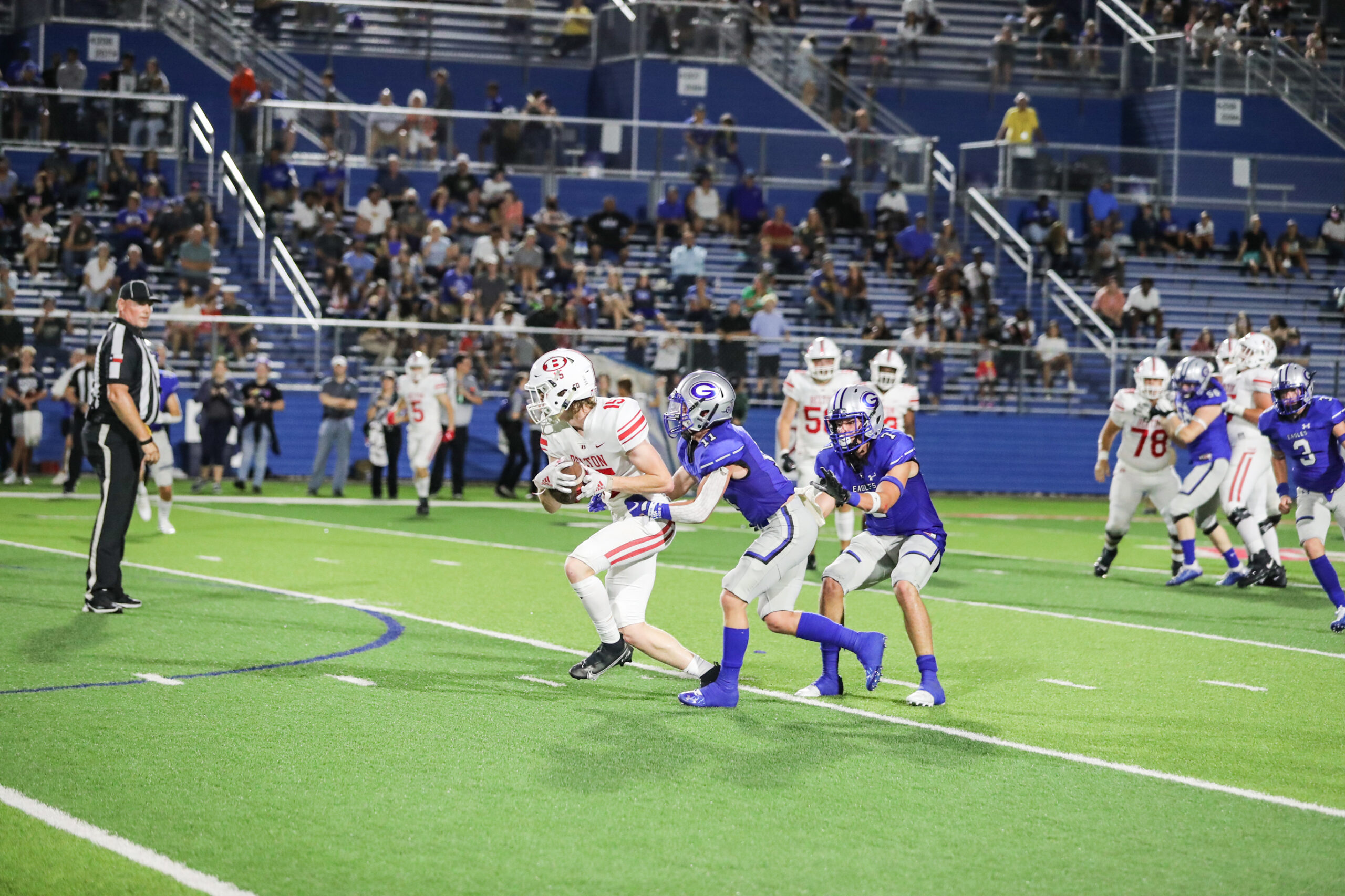 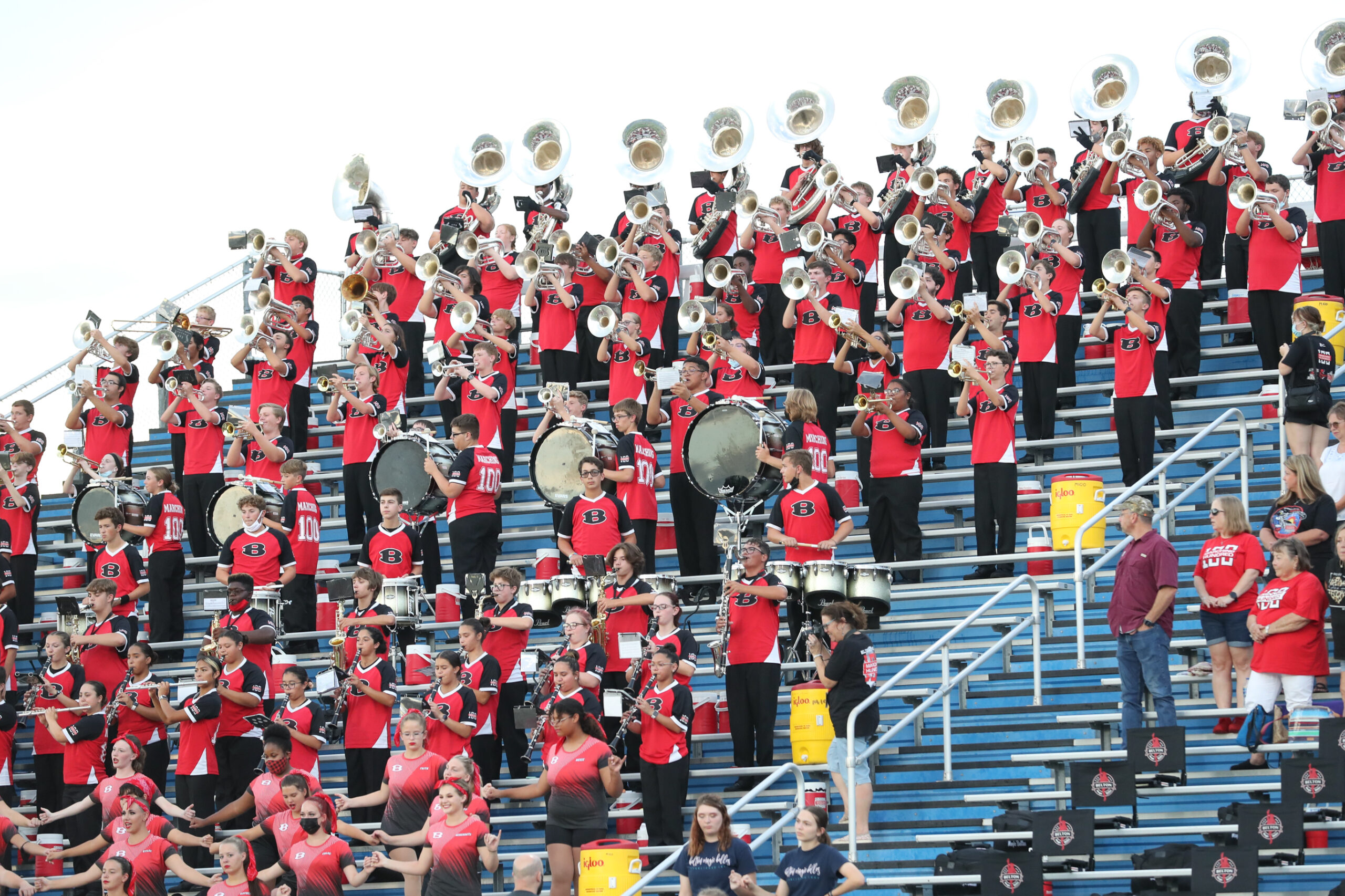 One year after allowing 22 unanswered points en route to a 36-27 loss to Georgetown, Belton earned a measure of revenge, scoring the go-ahead touchdown with 2 minutes, 58 seconds remaining in the contest to win 35-31.

Following the contest, Tigers head coach Brett Sniffin admitted the intangibles shown by his players were just as critical as the plays.

“They guys showed guts,” he said. “It was just pure guts.

“We made some mistakes early, because we have some young kids and they had some jitters, but we just found a way to pull it out in the end when we needed to.

After a back-and-forth start to the second half, the Eagles claimed a 31-28 lead following a 61-yard touchdown run by quarterback Darson Herman with 4:45 remaining in regulation, but it would not last.

Brown completed 17 of 21 passes for 260 yards and four touchdowns in his varsity debut, while Morgan led the Tigers with seven catches for 111 yards and two touchdowns.

“They handled the pressure well on that last drive,” Sniffin said. “Ty stepped up and made some good plays for a sophomore, and then Seth is just sneaky fast.

“He lulled his defender to sleep and then blew right past him.”

Belton started the game with a defensive stop as senior Aaron Bain intercepted a pass to end Georgetown’s first possession, but the Tigers could not capitalize.

The squads exchanged fruitless drives for the remainder of the first quarter, entering the second period in a scoreless tie.

Then, the offenses began clicking.

The Eagles were first to get on the scoreboard, crossing the goal line on the first play of the second quarter thanks to a 36-yard pass from Herman to Andrew Petter.

Belton responded on the ensuing possession, covering 73 yards in seven plays capped off by Brown’s 28-yard touchdown pass to Morgan with 8:20 remaining in the half.

Georgetown provided an immediate answer on the next drive to reclaim the lead, using a 65-yard touchdown pass to complete a three-play, 75-yard drive, but once again, the Tigers delivered, producing a 56-yard scoring drive after the Eagles’ onside kick attempt failed. Belton collected four first downs before Brown found Bryan Henry for a five-yard touchdown pass to send the teams into halftime tied 14-14.

Coming off the bench, Brown completed 11 of 14 passes for 137 yards in the first half, while sophomore Angel Guerrero hauled in team highs with five catches for 55 yards.

Following the break, Brown found Bryan Henry for a 48-yard touchdown to give the Tigers their first lead of the evening at 21-14, but the Eagles scored 10 consecutive points to take a 24-21 advantage.

Belton junior running back L.J. Underwood’s 16-yard touchdown put the Tigers back ahead by four points, 28-24. Four plays later, however, Georgetown scored its final touchdown on a 61-yard run, setting the stage for Belton’s go-ahead score.

The Eagles had one last drive, but turned the ball over on downs.

“Our defense played really well,” Sniffin said, “but we just wore ourselves out in the first half, because the offense kept shooting itself in the foot.

“Our defense was tired, but they rose to the occasion.”

Now, the Tigers must move on.

Belton makes its home debut Friday, hosting Round Rock in the first of two consecutive home games before opening its District 12-6A schedule at Copperas Cove on Sept. 24.

While the Tigers’ focus is forward, last year’s encounter makes it difficult to avoid looking back.

On the heels of allowing a 20-point halftime advantage slip away in a season-opening loss against visiting Georgetown, Belton rallied from a 28-0 deficit versus the Dragons, pulling within two-points, 35-33, with 7:26 remaining in the contest.

But the Tigers could not complete the comeback.

The rematch, which marks the sixth consecutive year the teams played, should be equally challenging after the Dragons closed last season with a seven-game win streak before falling to Cibolo Steele 26-19 in overtime of the area round of the playoffs.

Round Rock’s roster was heavily affected by graduation, though, ripping away multiple instrumental players, including 25-6A All-District Most Valuable Player Israel Morgan, a running back responsible for 2,175 rushing yards and 28 touchdowns as a senior.

The turnover was not an issue in their opener, however, and the Dragons bring in a record of 1-0 after defeating Waco Midway 69-17 on Friday at home.

If the Tigers are victorious, they would begin a season 2-0 for the first time since 2012, when they started with three consecutive wins punctuated by a 41-12 home win against Round Rock.

Although Sniffin intends to win the game, his main concerns reside elsewhere.

“The guys have a never-give-up attitude,” Sniffin said. “If they continue working like this, these close games are going to start going in our favor.

“It’s all about who is going to make the big plays, and the kids stepped up tonight.”