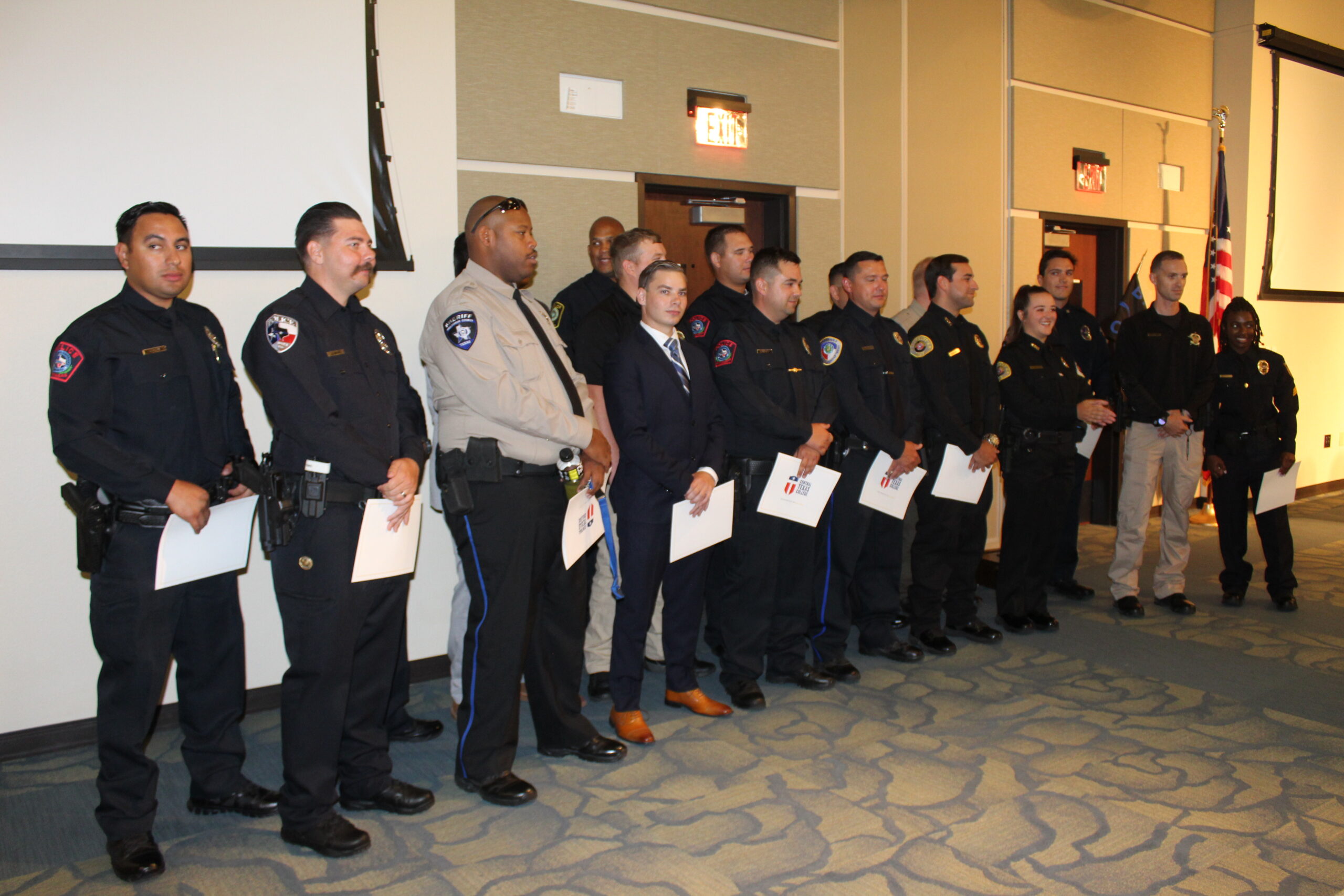 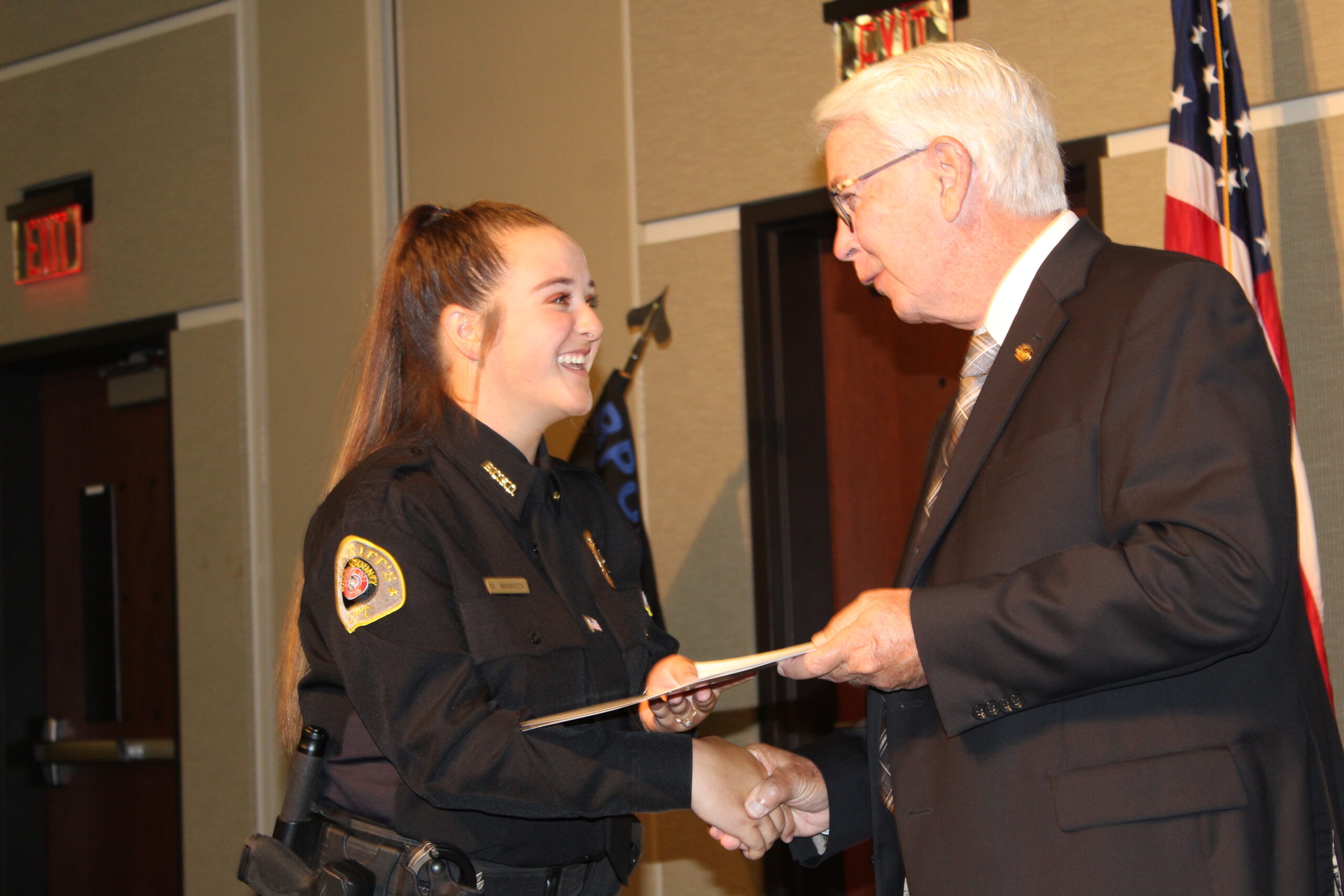 By BRITTANY FHOLER
The Belton Journal

Three more deputies will be joining the Bell County Sheriff’s Office following a recent Central Texas College Police Academy graduation ceremony at the Anderson Campus Center.
Twenty cadets graduated after completing the Basic Peace Officer Course (BPOC) Bravo 2022 program. The 22-week long course covers 720 hours of instruction and prepares students for the Texas Commission on Law Enforcement licensing exam by going over more than 40 topics ranging from one to 74 hours in length. Upon successful completion of the TCOLE licensing exam, the cadets will be eligible to become peace officers in the state of Texas.
One of the cadets is Belton native Mary Minnick, one of two women in the Bravo 2022 group.
“This is something that I have worked towards since I was in the fourth grade,” Minnick said. “It has been a part of me that I just knew right away as early as I can remember. Being in the academy, it was a really good experience.”
Minnick said that she and her fellow cadets connected quickly and became like a big family.
“Especially being a female, it’s different. I’m a female in a man’s world, but everybody, the instructors, all the guys here, we worked so well together and studied, and the instructors were more than happy to help us and encourage us all along the way,” Minnick said. “It was the best experience ever.”
Minnick said that she comes from a military family and never had an experience with a police officer as a child, but after seeing one during Career Day, she knew that was what she wanted to do.
“I want to be able to not just help people, but there is a lot of bad mindset when it comes to police officers, and I want to be able to be that person that somebody sees and goes, ‘They’re not bad. That person is here to help me. This person just made a bad day go better,’” Minnick said. “I want to help people that have those bad days feel a bit of relief when they see me come into the room, knowing that I am there to help them with whatever situation that they’re going through.”
Minnick said she chose the Bell County Sheriff’s Office because she wanted to serve the county that she grew up. Minnick graduated from Belton High School in 2017. Her father was stationed at Fort Hood and had also lived in Belton his entire life. She said that when he was deployed overseas and served his country, he was a safety net for the people back home.
“This is my home,” Minnick said. “Bell County is what raised me. It takes a whole community to raise somebody, and they did, and I want to be that safe line for the community that made me the person that I am today.”
State Rep. Brad Buckley, of State House District 54, was the keynote speaker at the ceremony. Buckley mentioned the message on the side of a police car in the 1960s and 1970s show “Adam-12”, which reads “To serve and protect” and suggested that the message should also say to inspire.
“You have the opportunity to go out into your communities whether they be an urban area or a rural area and inspire the next generation to follow in your footsteps,” Buckley said. “When you look around the state of Texas, we need more of you. We need others to choose that pathway to protect and to serve, and our communities need you more than ever. I can tell you this from the bottom of my heart- there may be noise that chatters about, that disparages law enforcement, but from my family to yours, and from my constituents to you and other Texans, I want to say thank you. The mission you’re about to embark on has never been more important, and I am certain that you will serve with honor and distinction.”
Buckley added that law enforcement officers are more than inspiring others to follow in their footsteps.
“They’re inspiring communities to let them know that our law enforcement officers are absolutely critical because our communities and counties want to grow,” Buckley said. “Folks, I don’t know much, but I know this: if we don’t have public safety, it doesn’t matter how good our schools are. If we don’t have public safety, it doesn’t matter how aggressive we are on economic development. It’s the first thing we have to do. Our families deserve and expect to be safe.”
During the ceremony, several awards of achievement were presented to the cadets. John Reza, who is joining the Lampasas Police Department, earned the highest scholastic average of 95.78. The class average was 92.16. The class selected Carl Trussell of the Killeen Police Department as the winner of the Best Instructor award. The Charles “Chuck” Dinwiddie Top Gun award for firearms proficiency went to Joseph Mees of the Coryell County Sheriff’s Department. Mees also won the Top Gear award for best driving competency and was elected class president by his fellow cadets.
Graduates of the BPOC Bravo 2022 class include:
Andrew Berumen, Dakota Guzman and Mary Minnick – Bell County Sheriff’s Department
Joseph Mees and Miller Shaffer – Coryell County Sheriff’s Department
Brandon English, John Reza and Jameson Vernado – Lampasas Police Department
Raymond Anderson and Davis Golden – Taylor Police Department
John Geis – Brown County Sheriff’s Department
Daryl Kossie –Williamson County Sheriff’s Department
Aaron Reyna – Burnet Police Department
Grady Vazquez – Brownwood Police Department
Aspen Walker – Kempner Police Department
Nakita Ware – Directorate of Emergency Services
Jeremy Gleason, Kyle Gottschalk, Elbert Powell, Jr. and James Venardos – independent.