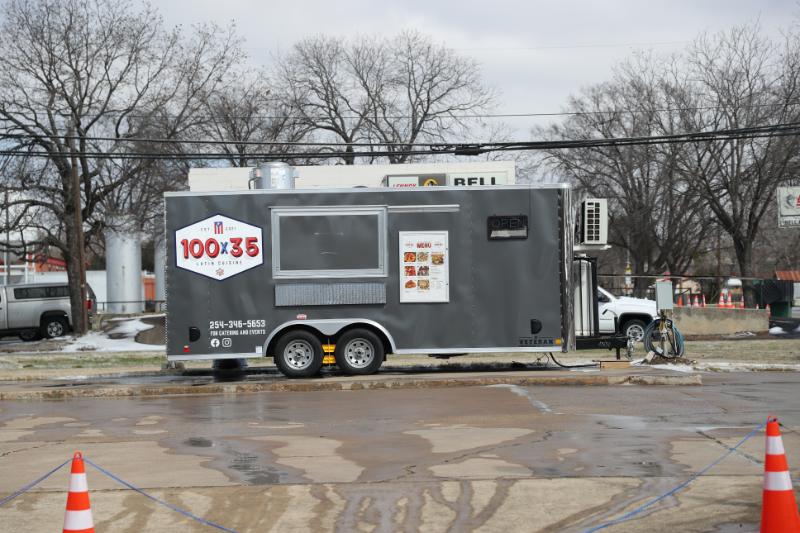 Angel Cruz, local entrepreneur and Army veteran, has turned his passion for Latin cuisine into a reality by opening a food truck in Belton in December.
He partnered with his son, Kevin Quintero and in January they opened for business.
Cruz named his food truck business 100×35, which is the size of his native homeland of Puerto Rico—a Caribbean island, and a U.S. territory.
Puerto Rico is about 100 miles long from east to west, and 35 miles wide from the south to north coasts.
Cruz moved to the US in 1995 and joined the Army. In 2008 he moved to Belton and retired from Fort Hood in 2013.
The 100×35 food truck offers a menu of Puerto Rican and Latin cuisine that is mostly plant-based, with an option to have cube steak, roast pork, ham, seafood salad or chicken.
“I wanted to bring the experience of Puerto Rico and the Latin cuisine to the area. My passion is for cooking. I don’t want to sell food. I want to sell an experience. I want the people to come and enjoy, and for the people who have never been to Puerto Rico, to get a taste of what Puerto Rican Latin food is. For those who have been to Puerto Rico and lived in Puerto Rico, I bring an authentic reminder of what it was like when they were there,” Cruz said.
“My cuisine is targeted for a specific customer. I’d say that 70 percent of my customers have been to Puerto Rico or have a Latin background. That narrows my customer base, but I also take my truck to other locations for events and catering. That helps to expand my customer base.”
Cruz has a Bachelor’s degree in business. He is completing his culinary arts school online to learn the business side of managing a kitchen.
“I don’t want people to just come here to eat. I want them to have fun. We have dog bowls set up so they can bring their dogs. We have a large grassy area behind the truck for people to play on. I’m going to set up some Corn Hole games in the grass area. We have picnic tables and umbrellas set up so customers can relax, enjoy themselves and dance a little. We will have table games, like Jenga and Dominoes for our customers,” Cruz said.
Even though the food truck industry is growing fast, Cruz wants customers to know that his standards for a clean truck are high.
“I always run my truck the way I would look at another food truck if I was a customer. I look at what they’re doing, what is their behavior, how do they maintain their vehicle? Do they wear gloves? Are they sanitizing, stressing cleanliness? Are they careful about not cross contaminating utensils with other foods or work surfaces?”, Cruz asked. “That’s the way I run my truck.”
Cruz has two employees, besides him and his son.
100×35 is permanently located at 426 E. Central Ave, Belton. Information about the menu or business hours can be found on social media and at www.100x35latincuisine.com.