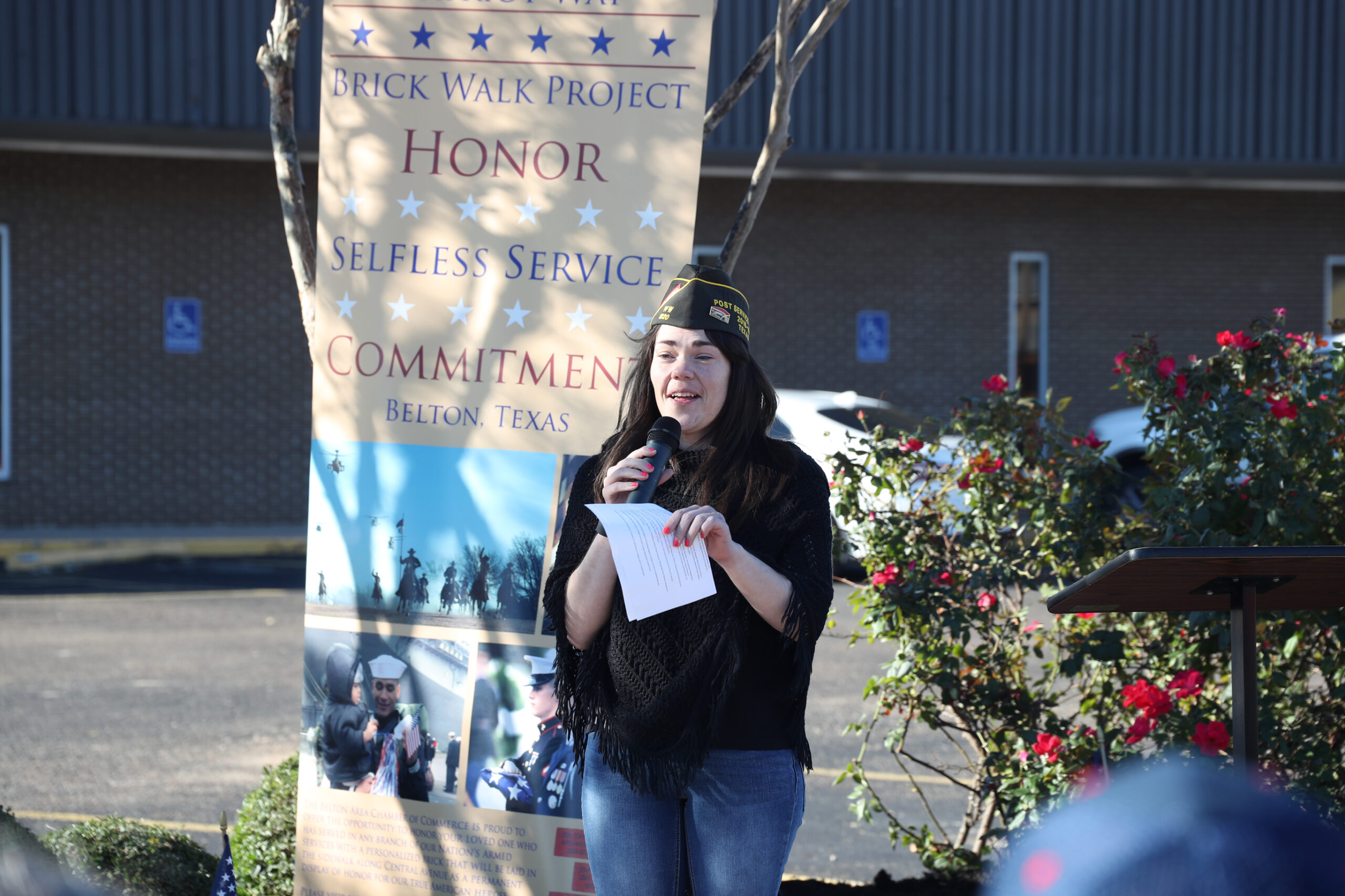 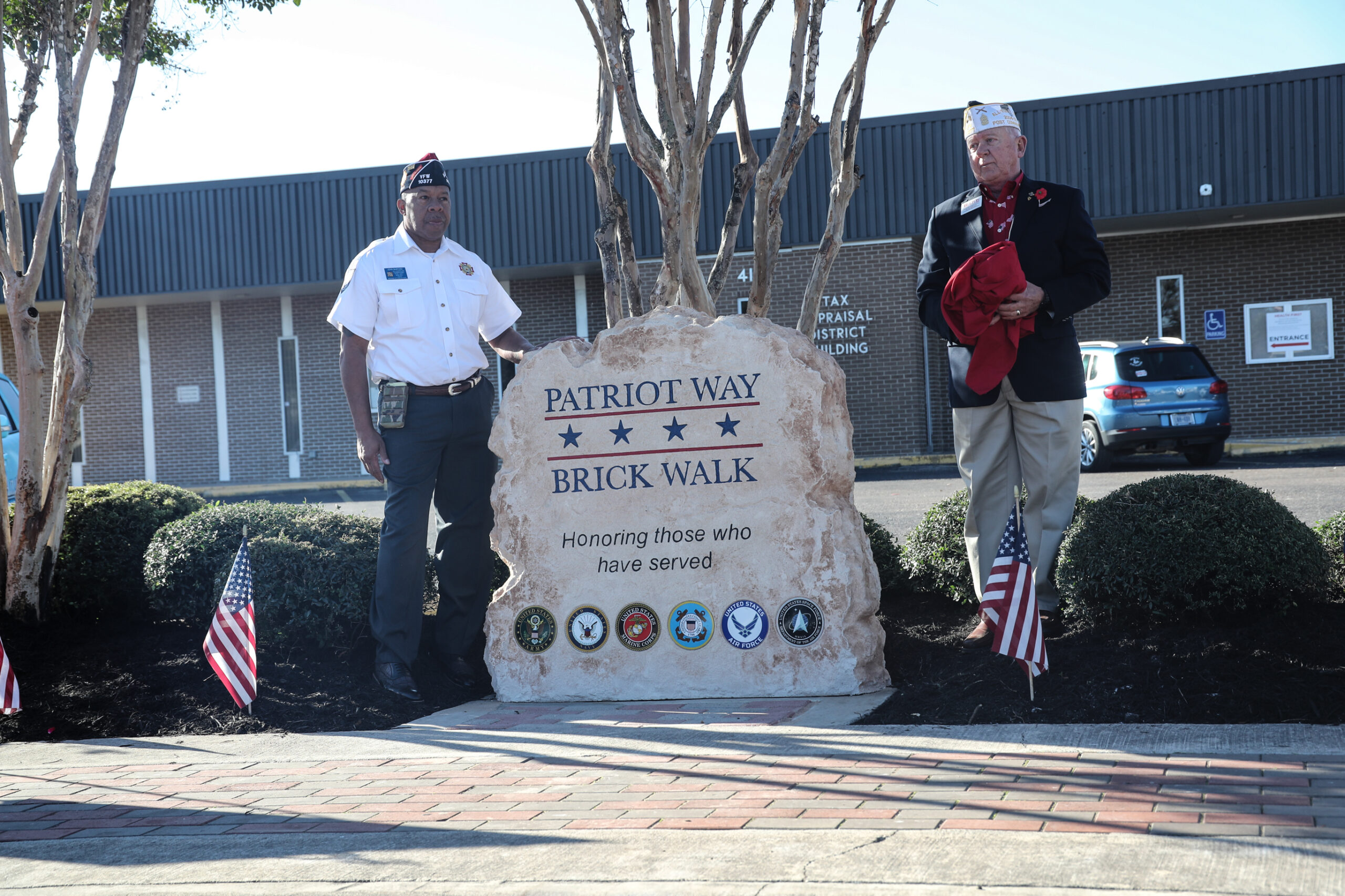 Randy Pittenger, president and CEO of the Belton Area Chamber of Commerce opened the Veterans Day ceremony for the Patriot Way monument sign ceremony by commending the Veterans who have served and are serving in the Armed Forces.

He thanked the families and reminded them that, “We know that in the Armed Forces, the whole family serves. Thank you for your service and your presence today, and thank you for being part of this country and this community.

“We are excited to be here to celebrate with our community and honoring our veterans. We are also here to draw attention to a project that this community launched into several years ago—the ‘Patriot Way.’”

Bell County Judge David Blackburn was present for the ceremony and said that there is no apostrophe in Veterans Day.

“This day is not possessive. It doesn’t belong to any one-person. It’s pleural—and the reason there is no apostrophe—is because this day belongs to all who have served,” said Blackburn.

The invocation was given by State Representative, Hugh Shine, who said, “Let us acknowledge that the triumphs of life are gifts from you, Jesus, and not merit badges. We pray for protection of this nation. May we do all that we can to maintain the rights and individual freedoms that you’ve granted to us. We thank you for the men and women and their families who sacrificially serve our country and often give their lives to protect our freedom.”

The Patriot Way Brick Walk was originally established by the Belton Chamber of Commerce and the City of Belton. In 2008, a bond issue was passed to renovate Central Avenue, with Belton’s Gateway running from the interstate to the county courthouse.

“It’s the entry to downtown, so it’s a valued part of our town,” said Pittenger.

The Patriot Way was created in phases using brick pavers. Phase one was kicked off on February 12, 2009, when the first Patriot Brick was laid to honor the soldiers who died during Operation Iraqi Freedom.

At a Veterans Day ceremony in 2010, Pettinger announced that the first phase was completed with over 400 bricks added. The plan for the last 12 years has been to add bricks each year. In 2011 the leadership class of Belton High School added three storyboards along the Brick Walk.

The City of Belton Mayor, Wayne Carpenter, said, “It’s a Chamber of Commerce kind of day, but a tad windy.”

Mayor Carpenter said he wanted to talk about Belton native Henry T. Waskow, who is honored on one of the storyboards along Patriot Way.

Waskow grew up in Belton, and his goal in life was to be a teacher. He was two years old when he moved to Belton. Waskow graduated from Belton High School in 1935. After graduating college with a bachelor’s degree, he was offered a job at Belton High School. He turned it down, expecting to be called for full-time military duty.

At times, Carpenter appeared filled with emotions as he read an article written by Ernie Pyle, a Pulitzer Prize-winning American journalist and war correspondent.

In Pyle’s article, he wrote about, “The Death of Captain Henry T. Waskow.” Pyle was there that night, in World War II, when Waskow was killed on a hill in combat.

Soldiers removed Waskow’s body from the hill by strapping him to a mule, and walked down the hill, next to the mule.

“This one is Capt. Waskow,” one soldier said quickly. They unstrapped him from the mule and laid him on the ground.  Another soldier held the Captains dead hand for five-minutes, saying nothing. In a tender way, another soldier said, “I sure am sorry, sir.”

Pyle wrote of Capt. Waskow. “In this war I have known a lot of officers who are loved and respected by the soldiers under them. But never have I crossed the trail of any man as beloved as Capt. Henry T. Waskow of Belton, Texas.” Waskow died on December 14, 1943, in San Pietro Infine, Italy. Per his request, he was buried in Italy.

Pyle was killed by enemy fire on Lejima (then known as le Shima) during the battle of Okinawa, in 1945. “The Death of Captain Waskow,” as written by Pyle, was portrayed in the movie, “The Story of G.I.Joe,” released on June 18, 1945 and starring Burgess Meredith and Robert Mitchum.

The Patriot Walk celebration was closed with the unveiling of the new Patriot Way Brick Walk monument, honoring those who have served.