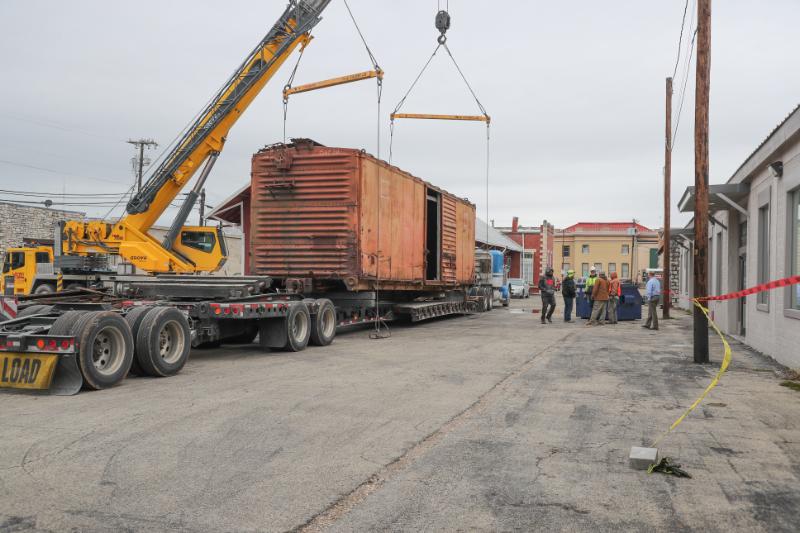 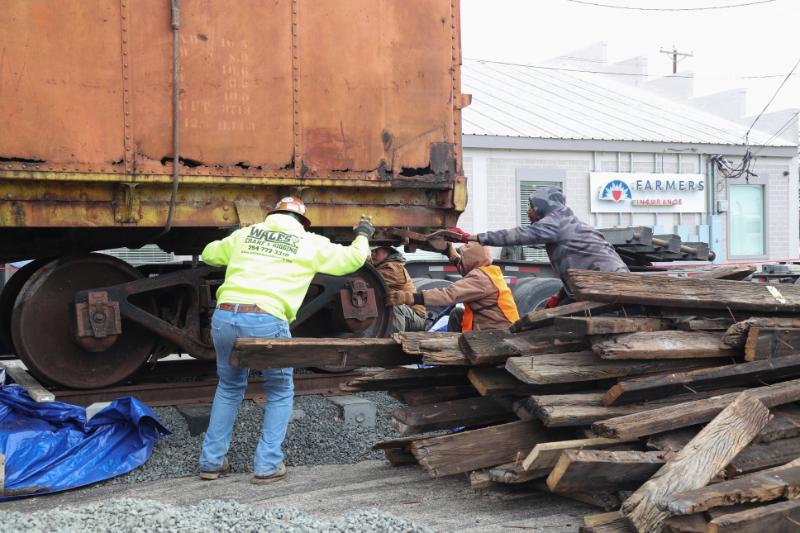 Two gigantic cranes, an oversized tractor trailer transport, and assistance from the Belton Police Department were needed to move a train freight car from Temple to the Belton Train Depot in downtown Belton on February 2.
The boxcar is one of two boxcars that handled freight for the Belton Railroad Company that was chartered on April 14, 1960.
In February 1961, the Belton Railroad purchased about seven miles of railroad between Belton and Temple and began operating on June 1, 1961.
Luke and Terry Potts are two of the four business partners who purchased the Belton MK&T train depot in downtown Belton.
“We’ve had a few challenges preparing the boxcar to be transported. We had to order a second crane to stabilize the boxcar, before lifting it onto the transporter. We made a test run to make sure the boxcar would fit under the traffic signals, any wires and trees, before we started transporting it. It took about 40 minutes to transport it from Temple to Belton. We know that some people were unhappy because we had to use most of the road going down 6th Avenue. We’re sorry about the inconvenience that we caused,” they said.
Historical photographs were used to identify the location of the railroad tracks alongside the original Belton Depot.
The train depot was built on the corner of East Street and First Avenue in 1899. To restore as much of the original look as possible, Luke and Terry built a set of tracks on the north side of the depot.
“None of us have built train tracks before. They say this was the shortest railroad in Texas. I think we’ll keep to that theme,” Luke jokingly said.
Crane crews worked slowly as they hoisted the freight car from the transport and lowered it onto the train wheels, called bogies. In the middle of each bogie, there is a center pin the boxcar rests on.
The boxcar is constructed of metal with a sliding door on each side of the car. The inside of the car has a wood floor and wood walls. After being stored in the open for decades it has faded in color. The car is rusted through to the inside in some areas.
According to the information on the outside of the boxcar, it has an empty weight of 49,700 pounds, and a maximum load limit of 127,300 pounds. Once refurbished and decorated, the boxcar will be available for lease space, art galleries, restaurants, boutiques or entertainment.
Luke and Terry have been working daily to restore the Belton Depot to its original condition.
“There is a lot of work to be done. We are leveling the building, making repairs to the front ticketing area and the back part of the depot,” Terry said. A second set of railroad tracks will be built on the south side of the depot, and the original caboose will be placed there. Restoration of the depot and train cars is still expected to be completed in six to nine months.