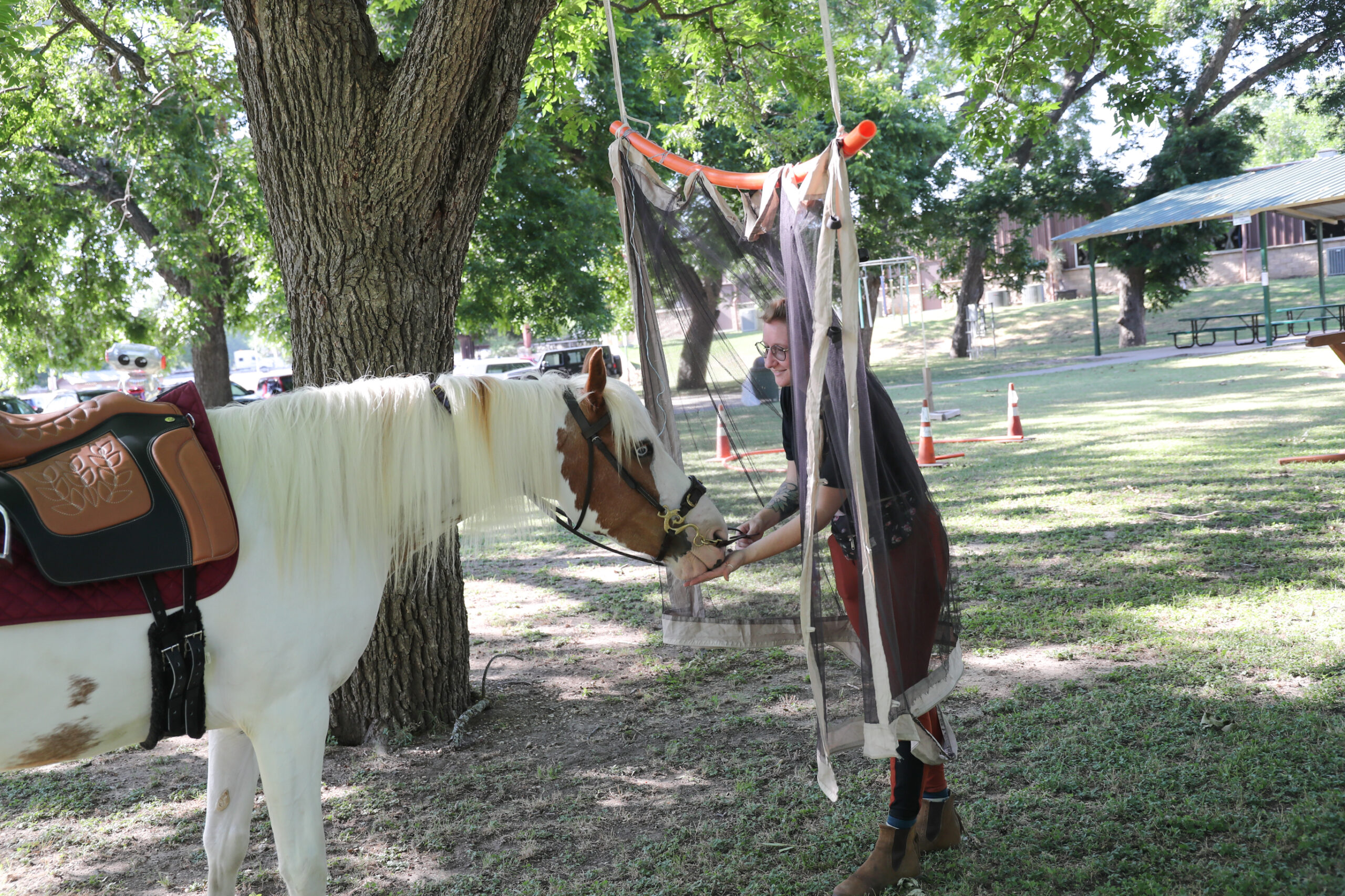 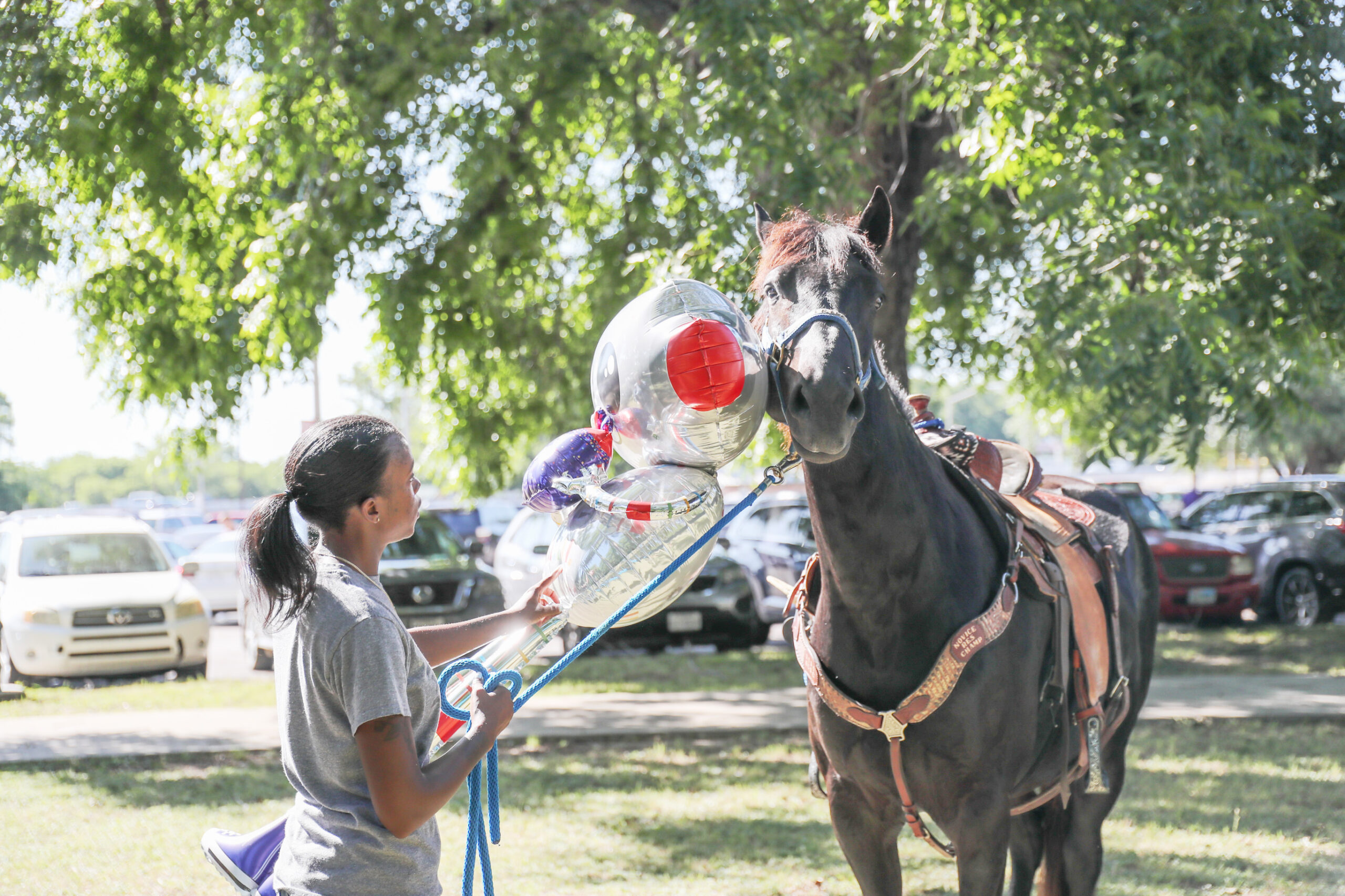 Marcia Cross is serious about preparing horses for the Belton Fourth of July Parade. Cross has been holding a Parade Preparation & Desensitization Clinic for Horses in Belton for 10 years. The City of Belton holds one of the largest Fourth of July parades in Central Texas.
Cross held a 10-hour desensitization clinic for horses on Saturday at Liberty Park.
The clinic focused on the natural fear horses have of loud noises, waving flags, nets, banners, streamers, crowds, uneven surfaces, traffic cones, umbrellas and more.
According to Cross, “Desensitizing a horse is not about avoiding the object, it’s about helping your horse to confront their fear of the object.” Most of the hazards for parade horses are the crowds, the noise, and the strange sights.
After Cross witnessed several parades with equestrian units, she felt the need to put her riding experience into developing a program to prepare riders and their horses for riding in a parade.
Cross said that most parades don’t require equestrian units to go through a desensitizing clinic before riding in a parade. She has designed an obstacle course with nets, flags, a teeter-totter bridge, and other obstacles to help desensitize horses. As part of exposing the horse to loud noises, Cross arranged for the Belton Fire Department and the Police Department to stop by the park and use all their siren frequencies, lights, and horns to see how the horses reacted to the typical sounds of a parade.
When a rider observes a stressful reaction on the obstacle course, the task is stopped until the horse calms down. After they have regained the confidence of the horse, they go back to the task that was stressful until they can complete it without showing fear. To keep a pattern of consistency with the horse throughout the obstacle course; the process is the same for each obstacle the horse shows fear of the object.
Understanding a horse, and what makes them back away from an unfamiliar object is important for the safety of the horse, the rider and the people who may be around. Horses are a prey animal and are always in a high state of alertness. It has been said that horses are afraid of anything that moves, and things that don’t move. They do whatever they need to do to survive. The first instinctive means of survival is for the horse to panic and run if they perceive a threat.
“Horses are primarily a pasture animal. It’s unreasonable to remove them from their pasture, get them to walk into a crowd of 30,000 people and expect them to behave calmly. It’s the rider’s responsibility to understand their horse’s body language and to reduce the horse’s anxiety in stressful situations. Horses can sense a riders confidence, competence, posture and even their breathing. If the horse senses that their rider is calm, they remain calm and follow the riders lead,” Cross said.
Riders use other suitable tactics to test a horse’s reaction, such as sitting on the horse, and waving flags or banners near the horse’s face to make sure they don’t get spooked. Another acceptable way of desensitizing a horse to a net, a flag, a plastic bag, is by rubbing the items over the legs, under the stomach, around the ears and the face, which are more sensitive areas of the horse. These are the areas likely to spook a horse if something touches it.
Cross said she wants the riders to understand that their horse might be terrified, and they might have to drop out of the parade before it starts.
Her message to the equestrian units is, “Don’t become one more problem for the horse, or for the parade promoters. But above all, don’t put the spectators in danger,” Cross said.