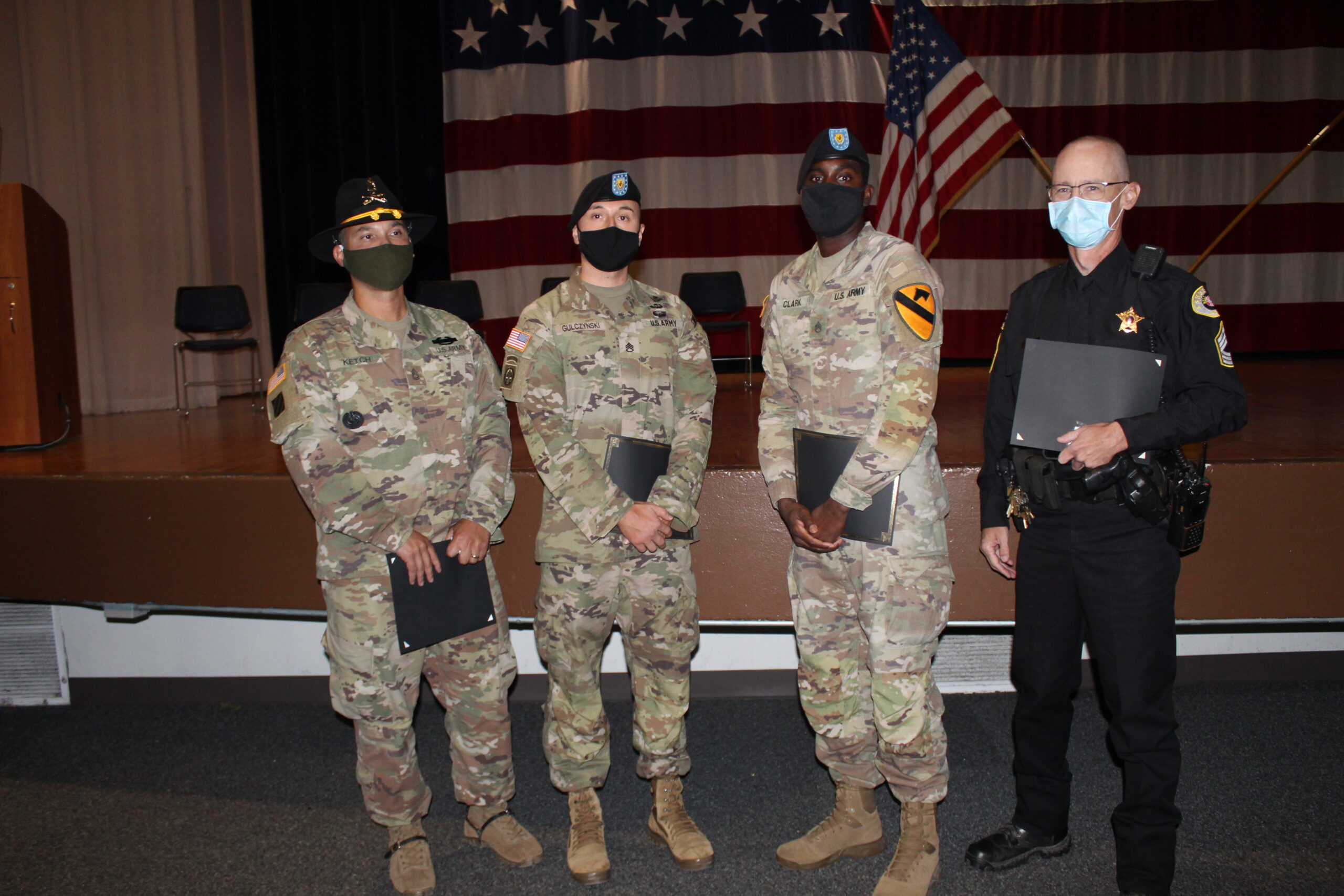 The incident in question occurred on June 19 of this year, after the unnamed soldier was reported to be considering suicide.

Ketch said he called 9-1-1 after the soldier’s wife, who was out of state, shared concerns that her husband was thinking about suicide. He then began coordinating with Clark and Gulczynski as well to locate their fellow trooper, who was eventually found to be sitting on a railed ledge about 100 feet above the Stillhouse Lake Reservoir, at the Stillhouse Dam Tower structure near Chalk Ridge Falls Park in Belton.

Sgt. C.M. Wilcox with the Bell County Sheriff’s Office was dispatched to the report of a suicide threat, and after arriving on scene, he approached the soldier who was sitting on the railed ledge, but he was unable to get a line of communication going, according to the incident report.

The incident report states that Gulczynski was able to communicate with the soldier, and he and the deputy would step closer to the ledge each time the soldier was distracted.

Clark and Ketch then arrived on scene and began talking with the soldier, trying to convince him to come back to the safe side of the railing.

As Ketch continued to distract the soldier, the other men moved closer, where Clark grabbed the soldier’s right arm, Gulczynski grabbed him in a bear hug, and Wilcox grabbed the left arm. The three men then pulled the soldier back over the railing to safety.

Bell County Sheriff Eddy Lange presented each of the men with the certificate.

Sgt. Maj. Jerry Long was one of the officials overseeing the awards ceremony Thursday afternoon and expressed how proud he was of the troopers in his opening remarks, calling them heroes.

“Personally, when I use the word hero, it describes the self-less service of individuals such as these three non-commissioned officers being recognized here today,” Long said. “The Army attempts to breed comradery and bravery, and these three answered the call for a fellow soldier in need. They saved their teammate, even while putting their lives in peril.”

The three troopers also received Army Achievement Medals from their battalion leaders during the ceremony.

Following the ceremony, Clark said that he typically likes to do his job in the shadows and not for recognition.

“Being recognized, that’s cool and all, but at the end of the day, he’s alive, and that’s all that matters,” Clark said about his fellow soldier and friend.

Ketch, who has been in the Army 19 years, said this wasn’t his first experience helping a friend/comrade in the military deal with suicidal thoughts. He said he focused on connecting with his soldier the only way he knew how by talking and keeping him focused so Clark and Gulczinsky and Wilcox could bring him away from the edge.

Gulczynski said this was the first time he was faced with this situation in the 10 plus years he’s been in the Army, but he felt that going through this and using the training he had learned previously would help him with the next time a soldier is in trouble.

Ketch said they fell back on their ACE training for suicide prevention when handling the situation, plus relied on the personal connection with their friend and fellow trooper.

Without that personal connection, Ketch said the outcome likely would have been different.

Ketch said that the Army’s emphasis on People First and the Golden Triangle and This Is My Spot training played a role in how that personal connection was made. Gulczynski said that usually once a month, they will go out for breakfast with their squads and have conversations to learn more about each other.

“It allows the soldiers to see a different side of us, that we are human as well, and that’s where they begin to open up and talk and they feel that they established that connection with us,” Ketch said about the team-building efforts and People First initiative.

Ketch said that he is thinking all the time about how he would act and intervene in a situation like this.

“Even in a situation like this that aren’t even my soldiers, I think about it, analyzing,” Ketch said. “I read the reports if I can, and I check my soldiers every day. I hope for the best, and a lot of times when situations like this occur, most of that’s hidden away. You’ll never see it. It never comes out. And when it does, it’s too late at that point. So, all you can try to do is just have that personal connection, and in this situation that personal connection did save his life.”

Ketch said that saving a fellow soldier’s life is just part of the job and would be no different than running in front of fire in combat for them.

“It’d be no different than me standing in front of the enemy for him, but at the same time, it’s not just the enemy that shoots the bullets either,” Ketch said. “It’s the enemy within or some other issues that might occur.”

Ketch said he was very proud of his non-commissioned officers for their actions as well.

“It’s part of our job, it’s part of our responsibilities, but to be honored that it was successful, rather than this day being a memorial service- that right there makes me feel happy,” Ketch said.