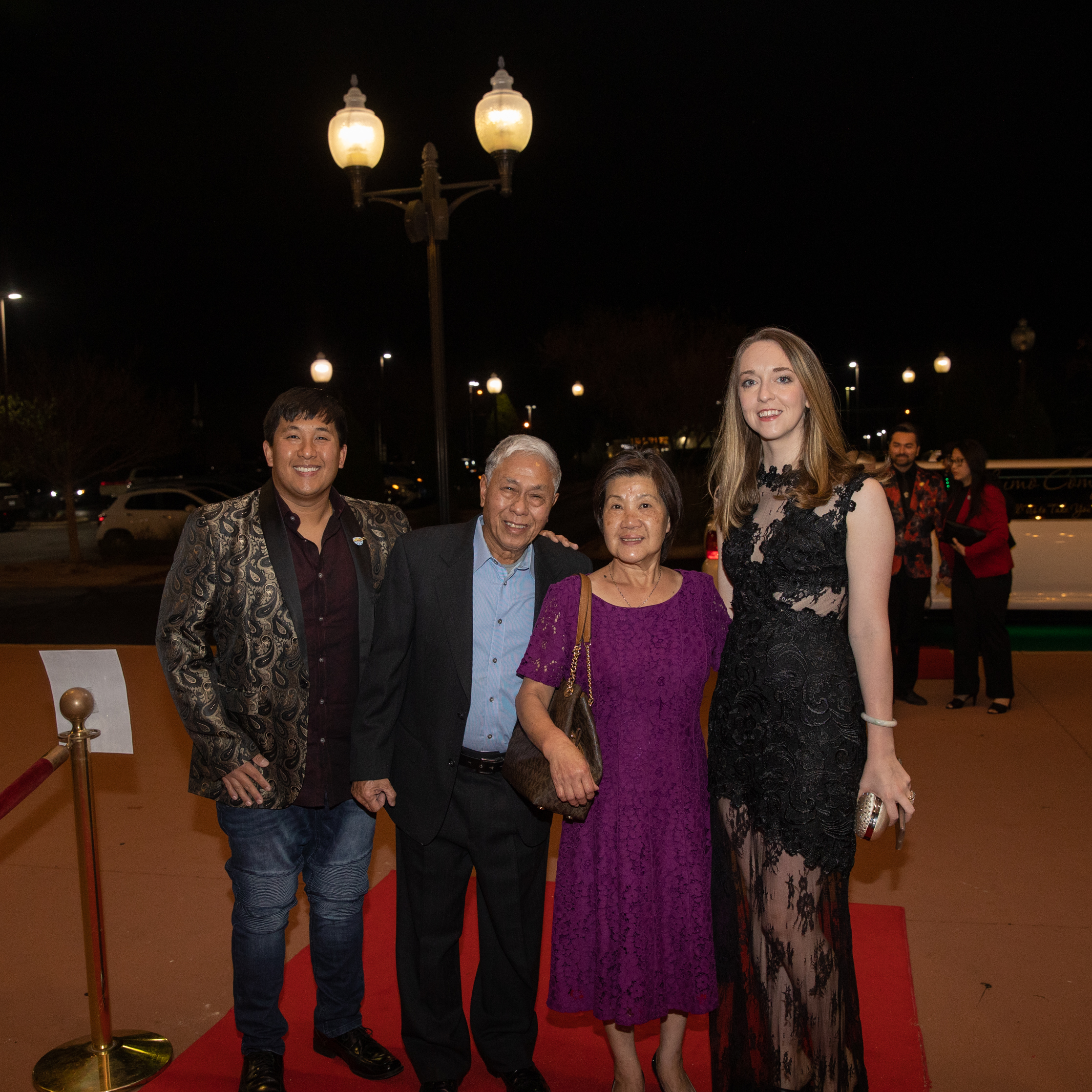 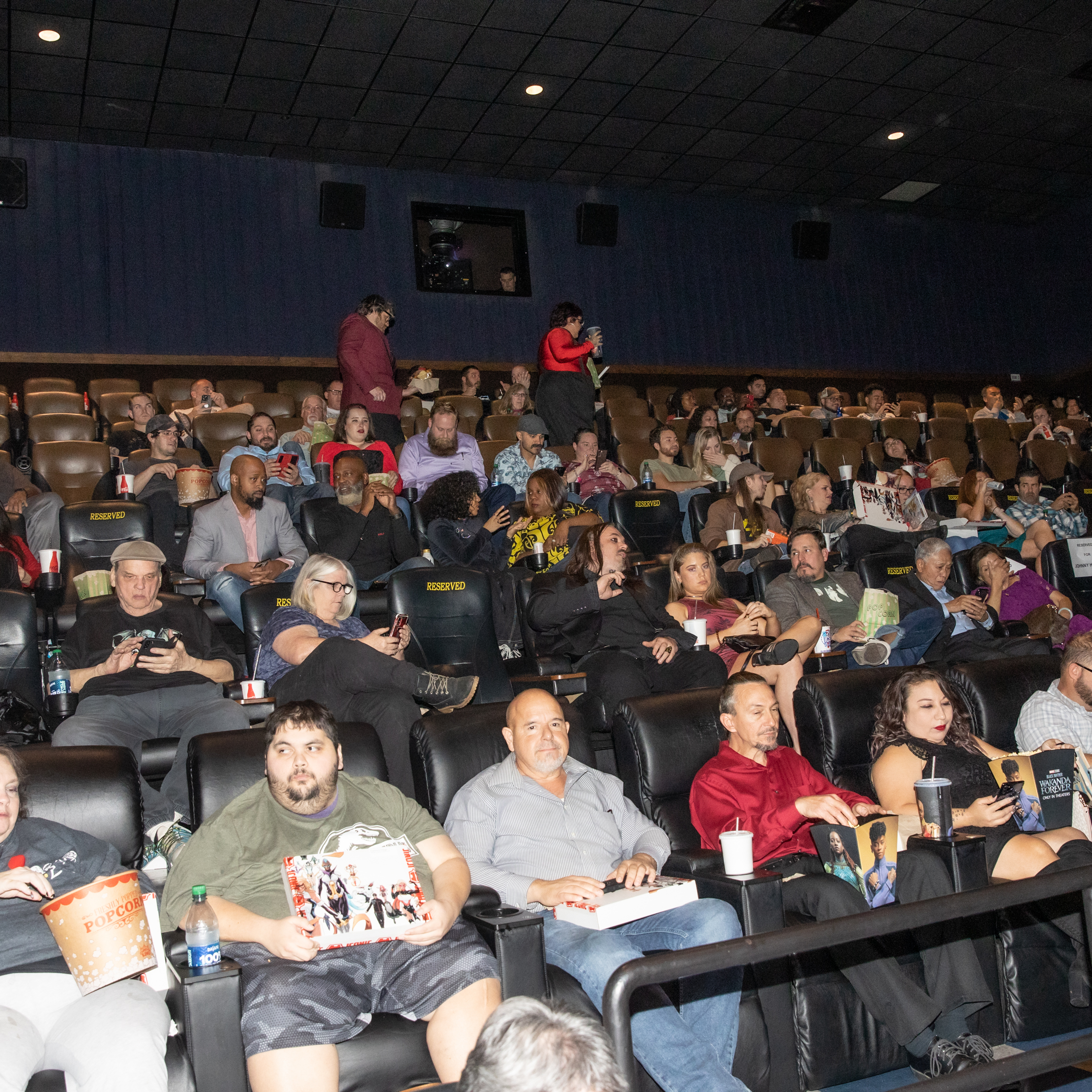 Independent film maker and movie director William Instone, along with the cast of Butchers Bluff, walked the red carpet for a private screening of the 1980s slasher style horror movie. The screening was held at the Grand Avenue Theater in Belton on Dec. 6.
Butchers Bluff stays true to all the traditions loved in the horror cult classic films like Texas Chainsaw Massacre, Halloween, and Friday the 13th. Legendary actor Bill Johnson, an actor known for his role as Leatherface in the 1986 horror film, The Texas Chainsaw Massacre 2, is first seen in Butchers Bluff saying, “You go out into Butchers Bluff lookin’, you won’t find him…he’ll find you. There ain’t nothin’ out in them woods except death.”
The movie is about a fictional group of Texas film school students who travel to Butchers Bluff to work on a film documentary.
The students investigate the disappearance of Alex Grimley, a 12-year-old overweight boy who was bullied. Grimley later killed the bullies while wearing a Porky Pig mask. He was put into a state hospital, was released 20 years later, then disappeared. Legend has it that the boy lived in the woods at Butchers Bluff and wanted to be left alone. In 15 years, 36 people had gone missing, and no bodies were found. During their investigation, the students are brutally massacred one-by-one by a beast known as the Hogman.
The 80’s slasher movie production was co-directed by William Instone and Matt Rifley. William Instone and Renfield Rasputin were co-writers of the movie. Classic horror icons such as Brinke Stevens, William Johnson, Paul Taylor, Johnny Huang, Michael Fischer, Paige Steakley, Samantha Holland, Kayla Anderson, Dakota Millett, Bill Oberst Jr., L.C. Holt, Tyler Shea Cone, and Christopher Winbush have career acting skills in award winning 1980’s style slasher movies, feature films, comedies, voice-overs, singing and dancing, commercials and more.
Butchers Bluff was a six-year project which began shooting in 2020 in Austin and other areas in Texas. The 90-minute film will be competing in film festivals hoping to find a buyer for the film to show in a larger market.
The writers, directors and producers are working on part-two of Butchers Bluff.
About 400 people attended the special private screening on two separate screens in the theater. During the question-and-answer session after the movie, movie fans commented on how well the acting and cinematography was.
One fan said she wasn’t a horror movie fan and closed her eyes. “My eyes were closed, but my ears weren’t saved,” she said.
Other fans wanted to know about some of the sound effects and how the gory scenes were shot.
Another viewer commented that the film contained a backstory to the killers and the rest of the characters, and thanked the writers, directors, and actors for putting out a film that stands out with a strong mental image that you expect to see in this movie genre.
Movie fans ranged in age from 20-60 years old. Movie viewers were able to buy merchandise and get autographs before leaving.

BELTON JOURNAL/MIKE MYERS
Executive Producer Johnny Huang and family stop for a photo on the red carpet for the screening of the movie Butchers Bluff at Belton’s Grand Avenue Theater.

BELTON JOURNAL/MIKE MYERS
Butchers Bluff actors, writers and directors gather for a photo prior to the screening of the movie at Belton’s Grand Avenue Theater.