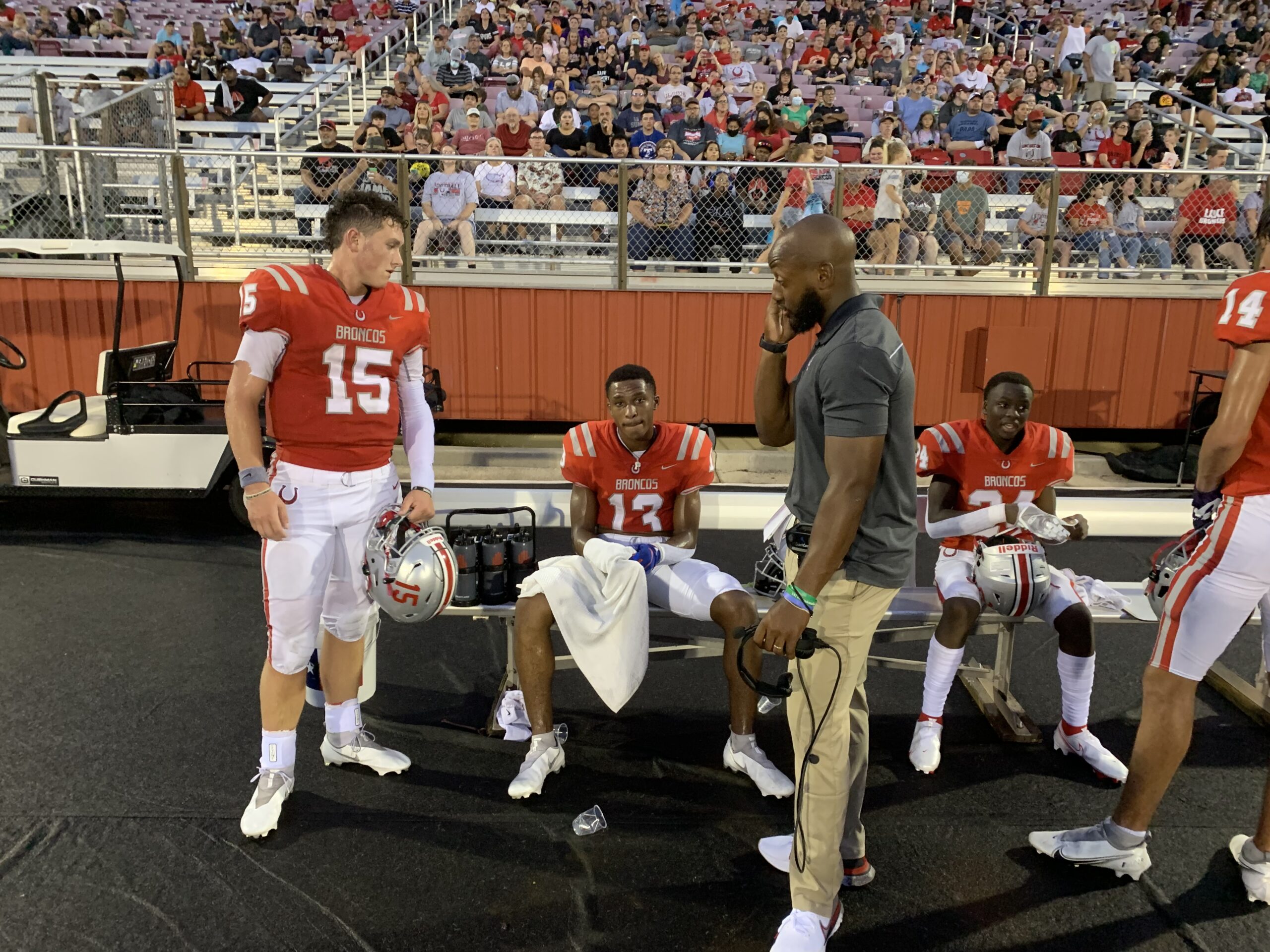 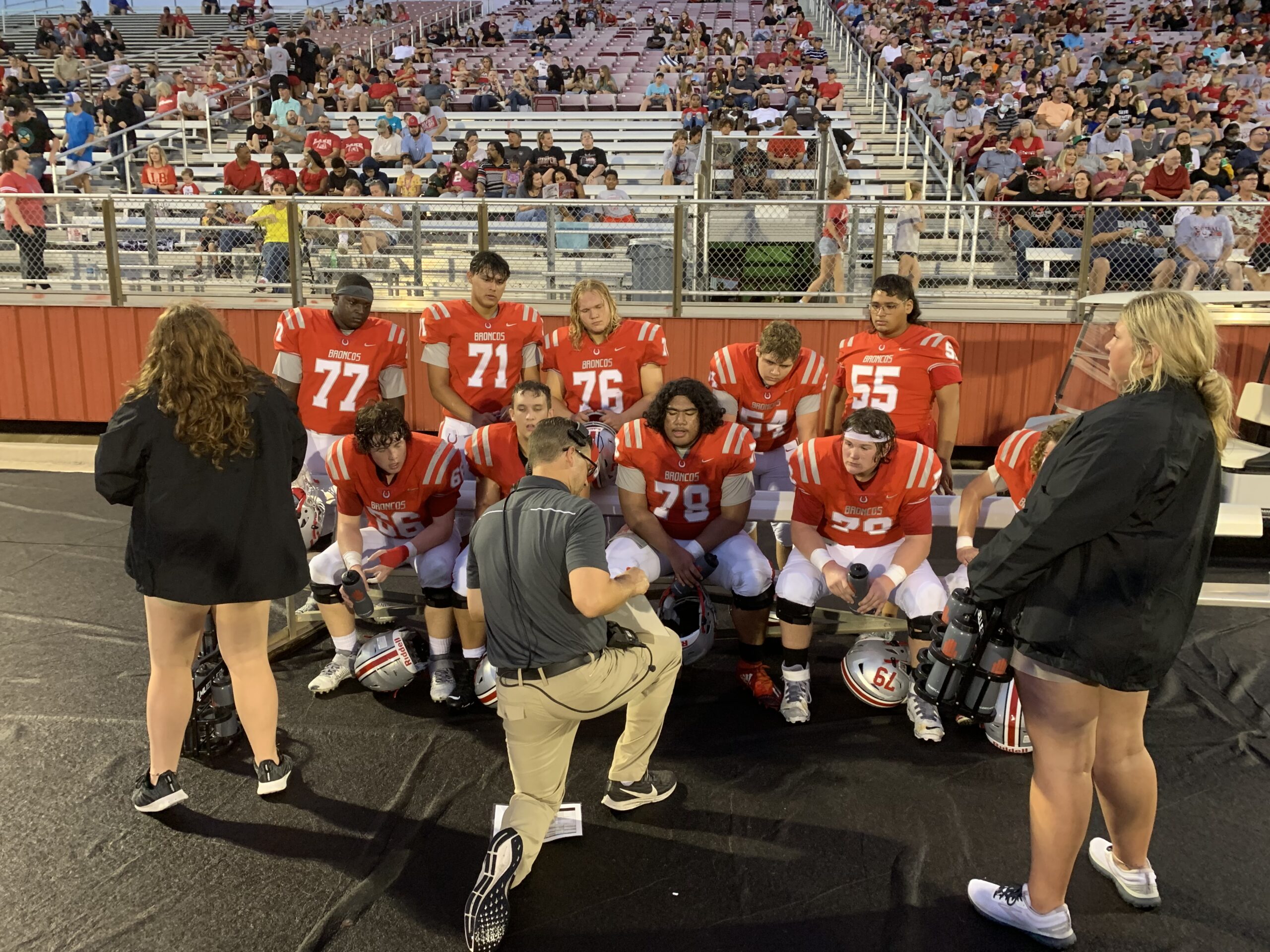 Belton- As the crowd began to erupt with excitement, Lake Belton quarterback Connor Crews took a knee to seal the Broncos first victory as a varsity program. Lake Belton cruised past Mexia 45-21 at Tiger Field in Belton.

Lake Belton head coach Brian Cope couldn’t have been prouder of his offense after they found themselves starting their final offensive drive of the first half at their own 1-yard line.

After a 10-play drive, Crews connected with Micah Hudson in the corner of the end zone to extend the Broncos lead 28-8 over the Blackcats.

“Our offensive line executed to perfection on that 99-yard drive,” said Lake Belton head coach Brian Cope. “You can’t ask for a better offensive drive than that right there.”

Lake Belton (1-0) put together a promising drive, but a fumble by Micah Hudson was recovered by Mexia’s Xavier Molina at the Blackcat’s 22-yard line.

Mexia (0-1) would capitalize on the Hudson fumble with a quarterback keeper from Trey Betts at the 5:39 mark of the first quarter. Betts would call his own number on the PAT to put Mexia on top 8-0.

The Broncos didn’t waste any time responding with their own scoring drive. Crews hit Hudson on a 44-yard strike to put Lake Belton in scoring position, then the junior quarterback would take it in himself from 4-yards out to bring the score to 8-7 with 5:10 remaining in the first quarter.

“What a great duo we have in those two young men and they’ll be back next season,” said Cope. “Connor and Micah made some great plays throughout the game and our offensive line did an excellent job of providing them time to execute.”

It was time for the Lake Belton defense to make a play now. The Broncos defense forced a Mexia punt after focusing a 3-and-out on 3rd and 21 from the Blackcat 10-yard line.

Mexia would sack Crews for an 11-yard loss on the first play following the punt, but the Broncos wouldn’t be phased.

Crews gathered his composure and hit his main target Hudson once more on a 60-yard touchdown pass that put Lake Belton on top 14-8 at the 1:33 mark of the first quarter.

The Broncos would get the ball to start the second half, where they took advantage of their rushing attack. Lake Belton needed ten plays to drive 77-yards, setting up a 3-yard touchdown run by junior running back Tristan Robin.

“T-Rob, he’s downhill doing a great job carrying the ball, same thing with D’Arius Wilkerson,” said Cope. “It’s been a lot of fun to watch those two guys and then Daniel Harden will be back next week to complete our three-headed monster in the backfield.”

Mexia would find their own groove in the third quarter. Xavier Molina would punch it in from 3-yards out for the Blackcats, snapping Lake Belton’s 35-point unanswered run.

The Blackcats would force an interception by Crews, at their own 17-yard line. Betts would connect with Da’Kendrick Brooks on the next play to cut the Lake Belton lead to 35-21 with 5:39 remaining in the third quarter.

“What I was most proud of is how we responded to adversity during the third quarter,” said Cope. “I told them all week that there are times in games when adversity happens, and that’s the r in Rise Up for a reason.”

Lake Belton’s defense would continue to reel throughout the third quarter. Mexia took advantage of Bronco penalties to put themselves in scoring position to start her fourth quarter.

Sophomore DB Peanut Brazzle would pick off Betts in the end zone, to set Lake Belton up with a fresh set of downs from the 20-yard line and snap the momentum of the Blackcats.

Wilkerson put a bow on the victory for Lake Belton, as he punched it in from the 2-yard line to put the Broncos up 42-21.

Lake Belton will be back in action on September 3rd, as they travel to the metroplex to take on Arlington Heights at 7:00pm.