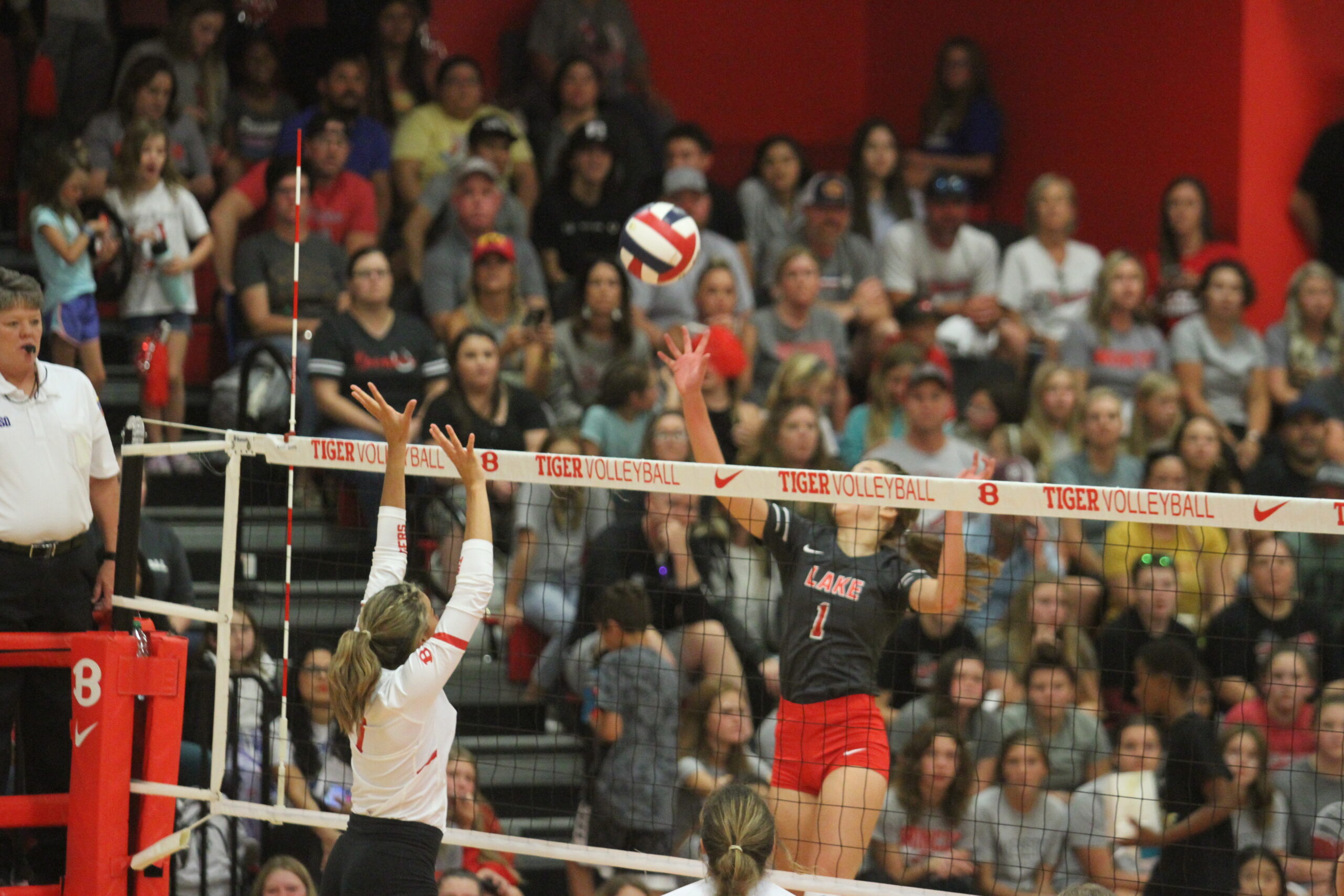 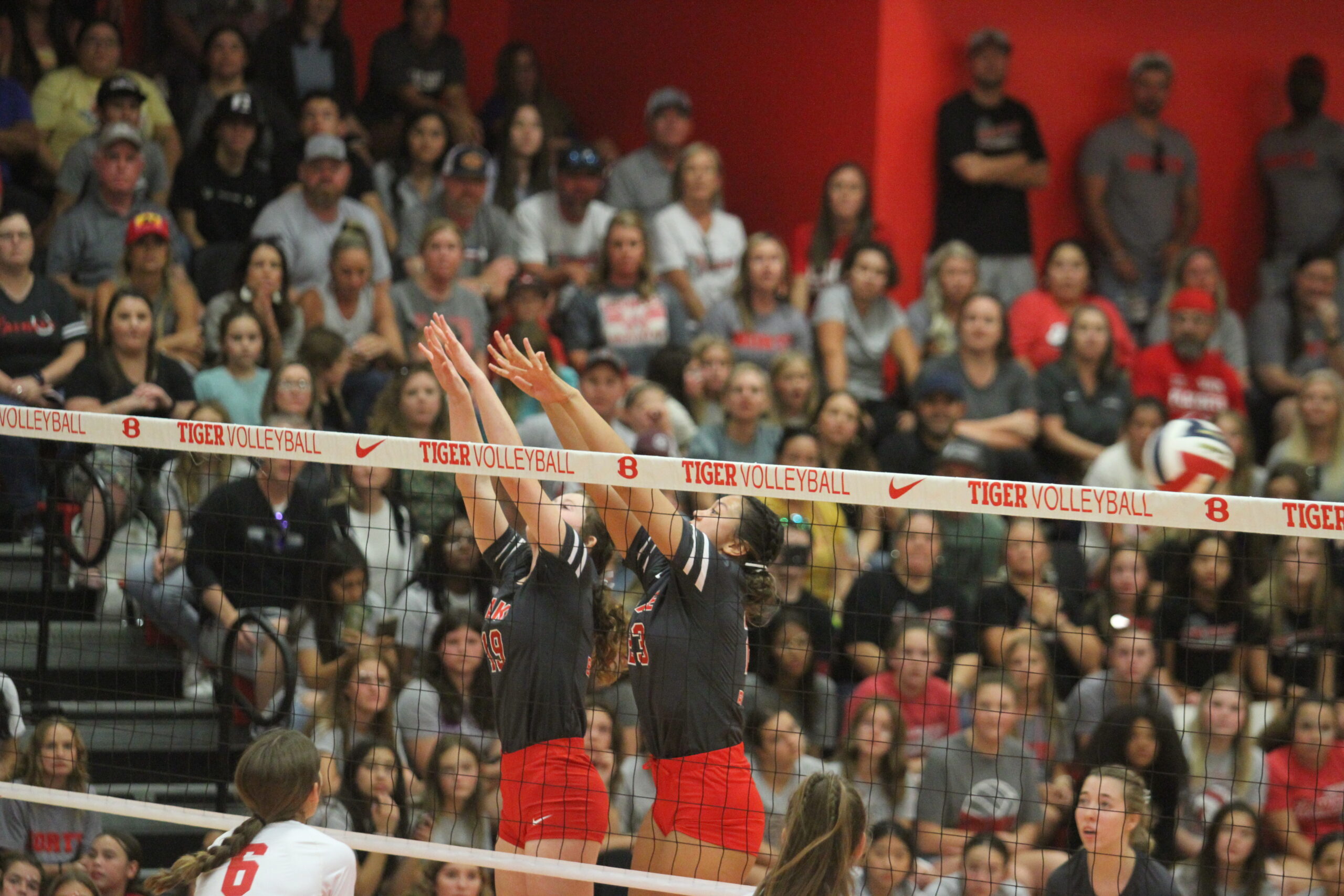 By: Garrett Wilson
Belton Journal
With four straight victories that have only lasted twelve sets behind them, the Lake Belton volleyball team went to Belton High School to face the Tigers on Sept. 27. This rivalry has remained intense ever since Lake Belton High School was established in 2020. This edition of the rivalry between the Broncos and the Tigers had a packed gymnasium, with limited seats left on the Lake Belton visitor side. Even though these two teams have had contrasting seasons thus far, the 2022 matchup was one to never forget. Lake Belton Head Coach Liz Ramsey said that controlling the game with limited distractions is the key for the Broncos.
“We wanted to keep our heads in the game because we knew that it was going to be a tough one tonight,” Ramsey said. “We also wanted to prevent the outside distractions control or change what we were doing.”
After the first few points of the first set, the Broncos were struggling to get close to the net to make offensive plays. With both team’s fanbases filling the gymnasium with cheers, the Broncos and Tigers were in a tight battle with the Tigers in the lead, 8-7. Later in the set, #1 Sydni Cartwright (senior) executed a successful kill to make the score 13-10, in the Broncos favor. The one difference that made this first set tight was because Belton was forcing the players from Lake Belton to make nonconventional plays. For example, #2 Gabby Jones (sophomore) and #20 Danica Bingham (senior) are normally the outside hitters for the Broncos. In the first set of this game, Jones and Bingham were setting up offensive plays rather than attempting kills at the net. To dissolve the offensive struggles, Coach Ramsey called a timeout, when the score was 18-16, in favor of the Tigers. After that timeout, Lake Belton fought to get points, but the Belton Tigers would eventually win the first set with a score of 25-22.
Coach Ramsey said that in the first set, her athletes were a bit shy on the court, but they responded well throughout the rest of the set.
“In the first set, I think that we came out a little bit timid,” Ramsey said. “[Our] confidence got rattled from the very beginning and we were able to shake it off and start fresh in set two.”
Lake Belton responded to losing the first set with taking a dominating 5-0 early lead in the second set. At this point, the Belton Tigers were forced to call their first timeout of the set, causing an uproar for the Lake Belton student section. Later in the set #16 Hanna Ward (sophomore) made a tough decision to not play the ball that was served from Belton, causing the set to get closer. Even though Ward made a common mistake, her team wiped away that error by extending their lead 8-3. Normally at the front of the net, #23 Trinaty Pearson (junior) executed a successful ace that grew the Lake Belton lead, 22-12. The Broncos would eventually win the second set in commanding fashion, 25-13.
With the score tied one set a piece, Lake Belton’s Jones’ completed two powerful kills that made the score 5-2, in favor of the Broncos. While Lake Belton struggled to find their offensive rhythm, their offense in the third set seemed simple. Once again #9 Kaleice Cain (junior) was in the center of the Lake Belton offensive juggernaut, making unpredictable plays while setting her teammates up for success. The Tigers called a much-needed timeout when the score was getting out of hand, 16-7, in favor of the Broncos. Another kill by Bingham came, thus making the score 23-12, Broncos ahead. Lake Belton would quickly win the third set with a score of 25-13.
The fourth set of the match began with a 6-3 lead for the Belton Tigers. Then, #24 Aneia Stallings (sophomore) made an outstanding block to maintain the small deficit. After the Stallings block, the lead for the Tigers quickly dissipated as Lake Belton scored five straight points to make the match 9-6, in favor of the Broncos. Jones also contributed to the fourth set with another powerful kill to make the score 10-7, in favor of the Broncos. Even though the referees made the match frustrating for both coaches, Lake Belton responded well by maintaining their lead 18-15. Lake Belton’s Cartwright produced another point for the Broncos, extending their lead 20-15. Another kill by Jones shook the entire arena as the Lake Belton student section roared in excitement. One point later, the Lake Belton Broncos would win the fourth set with a score of 25-19.
The Lake Belton Broncos defeated the Belton Tigers three sets to one.
The Broncos’ next challenge will be against a tough Killeen Ellison team, a team that is undefeated in district play. Ramsey said that this match will be a challenge, but the gameplan for her team has not changed.
“We are going to prepare as best as we can [and] make sure that we are ready for an extremely quick, tall, athletic team that’s going to move the ball well and work together well,” Ramsey said. “We are just taking these next two days to prepare and make sure that we go into it with the best mindset as we can, and we are excited that it is a home game.”