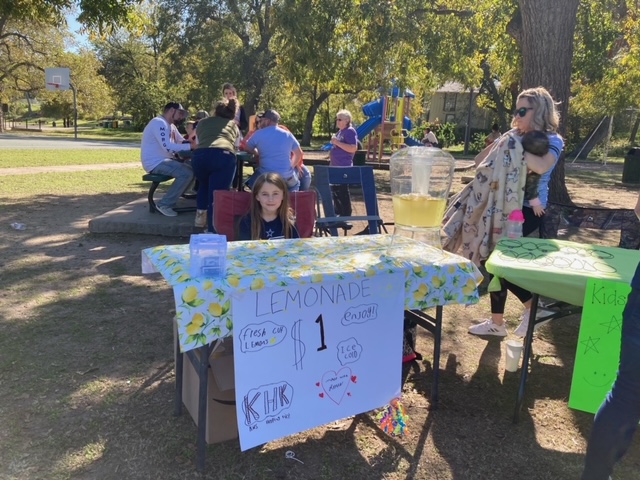 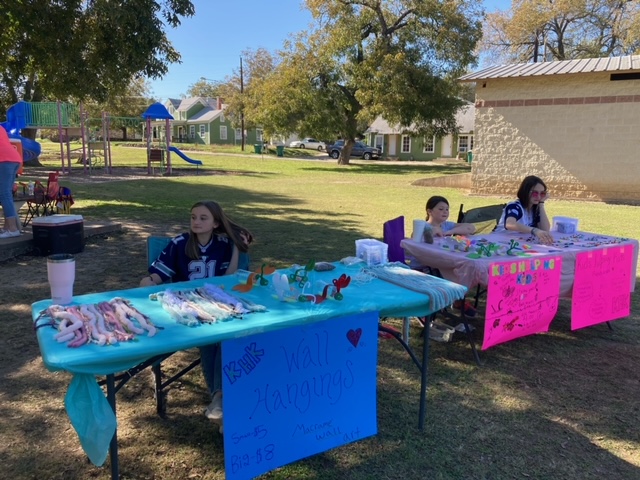 With the sun shining and phenomenal temperatures Sunday afternoon, it seemed like the perfect day to be at Yettie Polk Park in Belton.

Carrie Mann, Stephanie Lynch, and their children team up every year to create and sell crafts to raise money for needy families during the holiday season.

From 11:00 until 1:00, tables were set up and decorated in the park for guests to browse through the creations that the kids have made for sale.

The children in the meanwhile fed ducks and showed excitement for the crowd coming in to see what they had made.

Refreshing lemonade, inspirational guitar pick necklaces, monster bookmarks, chocolate and peanut butter “Puppy Chow”, and decorative “Chip Clips” are just some of the goodies for shoppers to look through.

Grandmother to these imaginative children is Sharon Mooney, the primary host to ignite this event, along with the enthusiastic help of the kids.

Christmas has inspired the family to share with those who may not have as much as they do.

Giving her grandchildren one chore to finish per week for one dollar, Mooney inspired the children to use their earnings to purchase two Christmas gifts for kids that didn’t have as many nice things as they did.

Mooney often stated to them, “What can you do to make a difference in this world?”

Celebrating this yearly, the young minds decided to take this idea a little further and help more people during the Christmas time.

Making bracelets, keychains, bookmarks, and various other crafts, the kids began with their project by advertising their art and jewelry on Facebook.

With those items selling out fast, Mooney and her family decided that they should lead a fundraiser as well.

Sixteen-year-old Kyleigh Lynch has perfected her art in making keychains both inspiring and positive. Her products gain more and more attention every year.

Shoppers could not stop talking about Patience and her Glow-Stick Lightning Bugs, as well. Decorating a bottle with googly-eyes and colorful wings, Patience cracked a glow-stick and placed it inside the bottle to watch her project come to life.

he dedication and excitement on the children’s faces to offer their work and time to help those in need was truly a touching sight to see.

The group has lent their helping hands to several organizations such as the Unincluded Club and CASA, along with helping three different school districts that the participating children attend.

Carrie has also said that they had helped provide a meaningful Christmas to children that have been split from their families through Child Protective Services.

This year, the proceeds will go to a family of nine that attend Carrie’s church and also assist children within the Copperas Cove, Belton, and Houston school districts.

“We let God lead us to who he wants us to help. He can put people in our paths that truly need us,” Carrie said.

Every year, the families and friends associated with this event are looking forward to getting a broad word out about their fundraiser. They hope to invigorate more people to offer their support to those who need it during the giving time of year, as well as every other day.

With Thanksgiving around the corner and Christmas spirit in the air, the group of “Kids Helping Kids” smiled at the achievements they have made. Their successes in this plan have also spread smiles to someone that might have needed one. 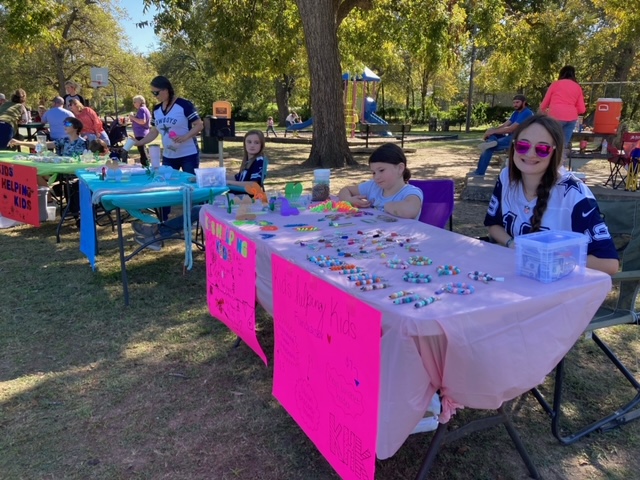