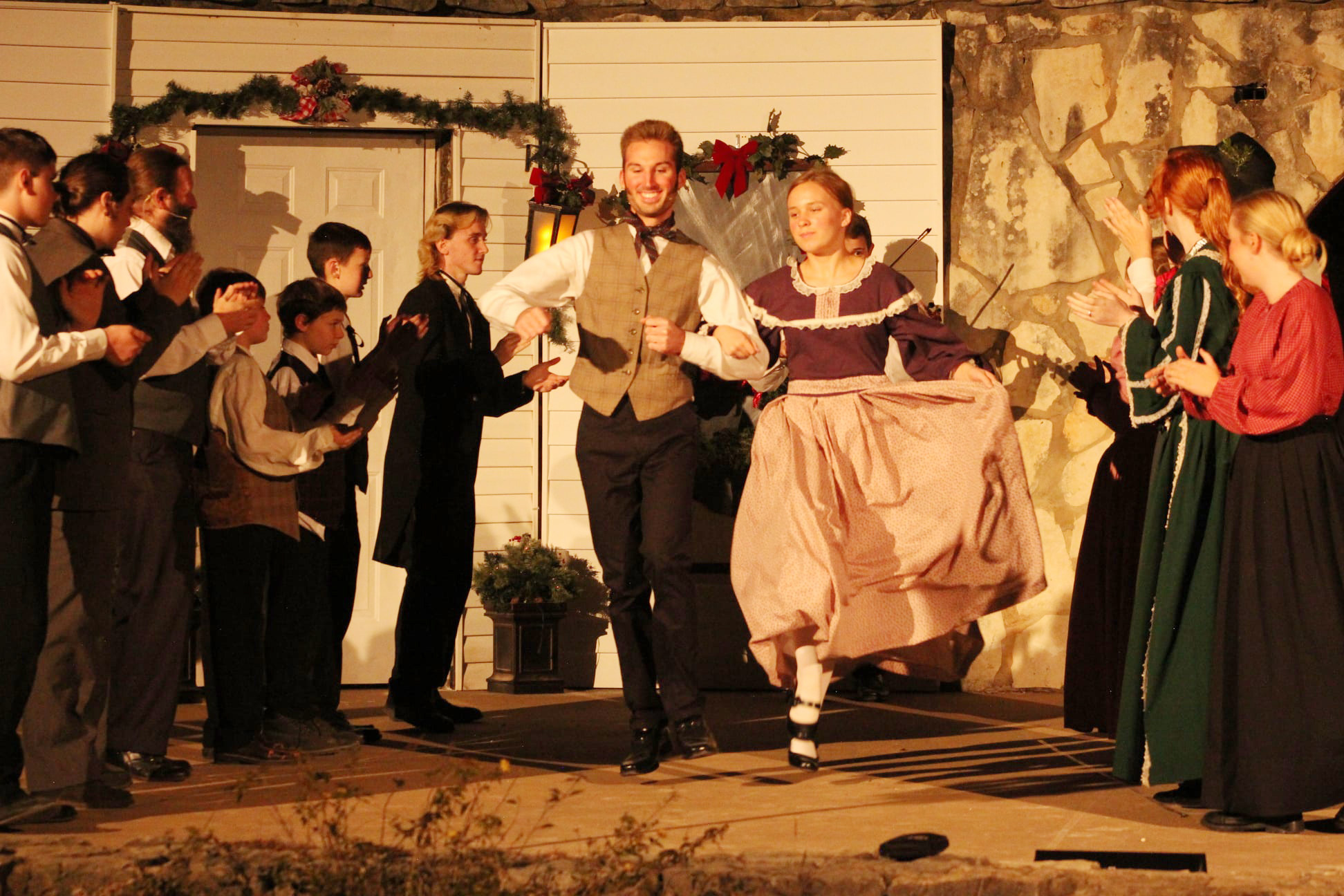 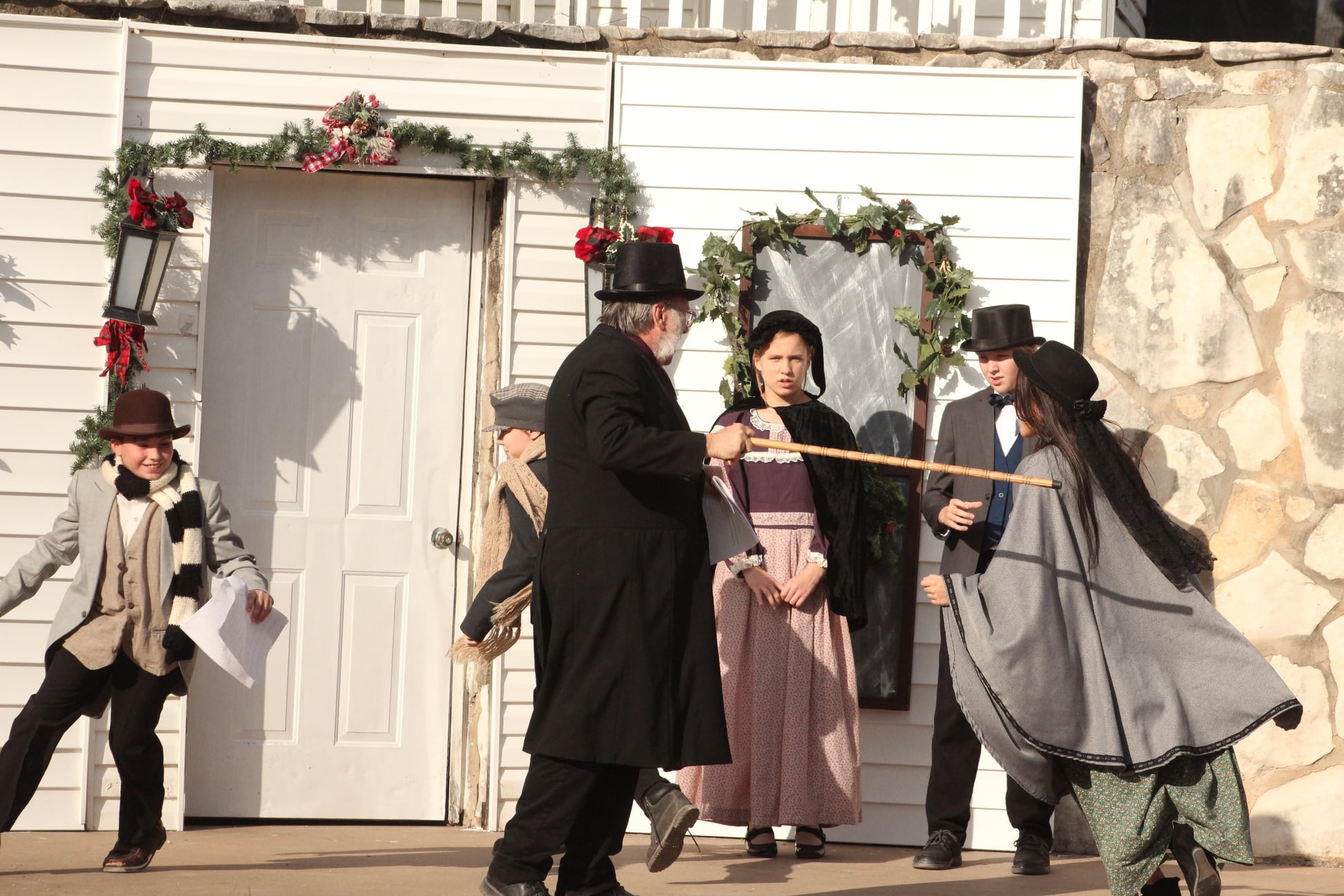 The Tablerock Festival will celebrate more than three decades of Bah! Humbug! when it presents the 30th annual performance of Charles Dickens’ – A Christmas Carol. Thom Wilson directs the performance of the play based upon Charles Dickens’ tale.
The performances will be Dec. 2-3 and Dec. 9-10 on the stage of Tablerock’s Goodnight Amphitheater located at 409 Royal St., Salado.
Harry Sweet adapted Charles Dickens’s famous Christmas story to the Tablerock stage. The cast and crew, which will be selected after auditions in October, will number more than 40 locals.
For many local families, Tablerock’s “A Christmas Carol is a family tradition. Gracing the stage this year are many old and new families to Tablerock Festival productions. The Michael Cahoon Family of Salado has been doing the play for over a decade. Mother Laurie Cahoon has played many adult roles before serving as the loving Mrs. Cratchit. Audiences have watched Nathan Cahoon grow from a small boy in the ensemble to Fred Cratchit, the nephew of Ebeneezer Scrooge.
Director Thom Wilson, from Temple, has grandchildren who have grown up playing various roles. His grandson Riley Montgomery has grown from playing Tiny Tim to playing Young Man Scrooge and his grandson Michael has progressed from the ensemble to the role of Christmas Future.
The Gari Maki Family of Salado joined the theater troupe several years ago and includes his wife, Susan, who plays the older Belle to Gary, who plays Belle’s husband. Their children have played roles from Tiny Tim and the Cratchit children to dancers at the Fezziwig Party.
Newcomer Greg Alcozer has joined his nephew Jack Cabaniss, the Fiddler on stage, as Mr. Fezziwig. Ebenezer Scrooge is Jimbo Moore, and he and his wife Tonja have graced the stage for several yaers now, even becoming surrogate parents to the kids backstage and keeping peace while acting their special characters on stage. Marcia Chiarelli as the Char Woman and her son Cody Chiarelli, who plays Bob Crachit, are both great character actors, so it must run in the family.
Other families this year include: Evalyn and Micah Cazier, Michael and Amanda Fisher, Jennifer and Emily MacCauley, Marcia and Cody Chiarelli, Caidance and Cailynn Ferrell, Amanda and Kaylee Caruth, and the Johnson family—Amanda, Matthew, Lane, and Kendall.
Gates for the show open at 6 p.m. and performances begin at 7 p.m. each evening at Tablerock’s Goodnight Amphitheater located at 409 Royal St. Tickets are available at the gate: $15 for adults, $10 for students and $5 for children 12 and under. Tickets may also be purchased on-line at CentralTexasTickets.com.
The concession stand opens at 6:30 p.m. nightly for sandwiches, cold and hot drinks, chips, and candy. For more information, call Tablerock at 1-254-308-2200.