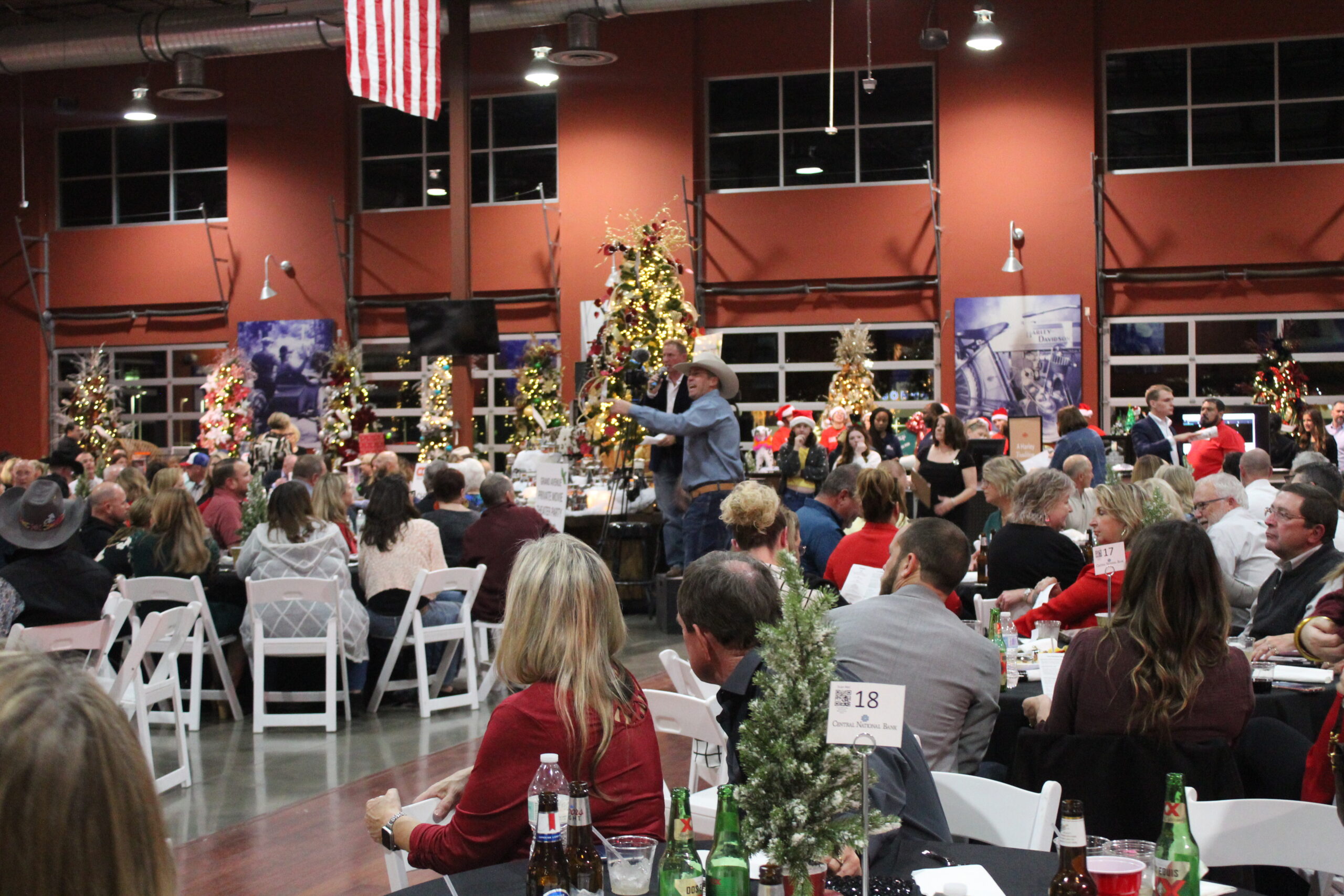 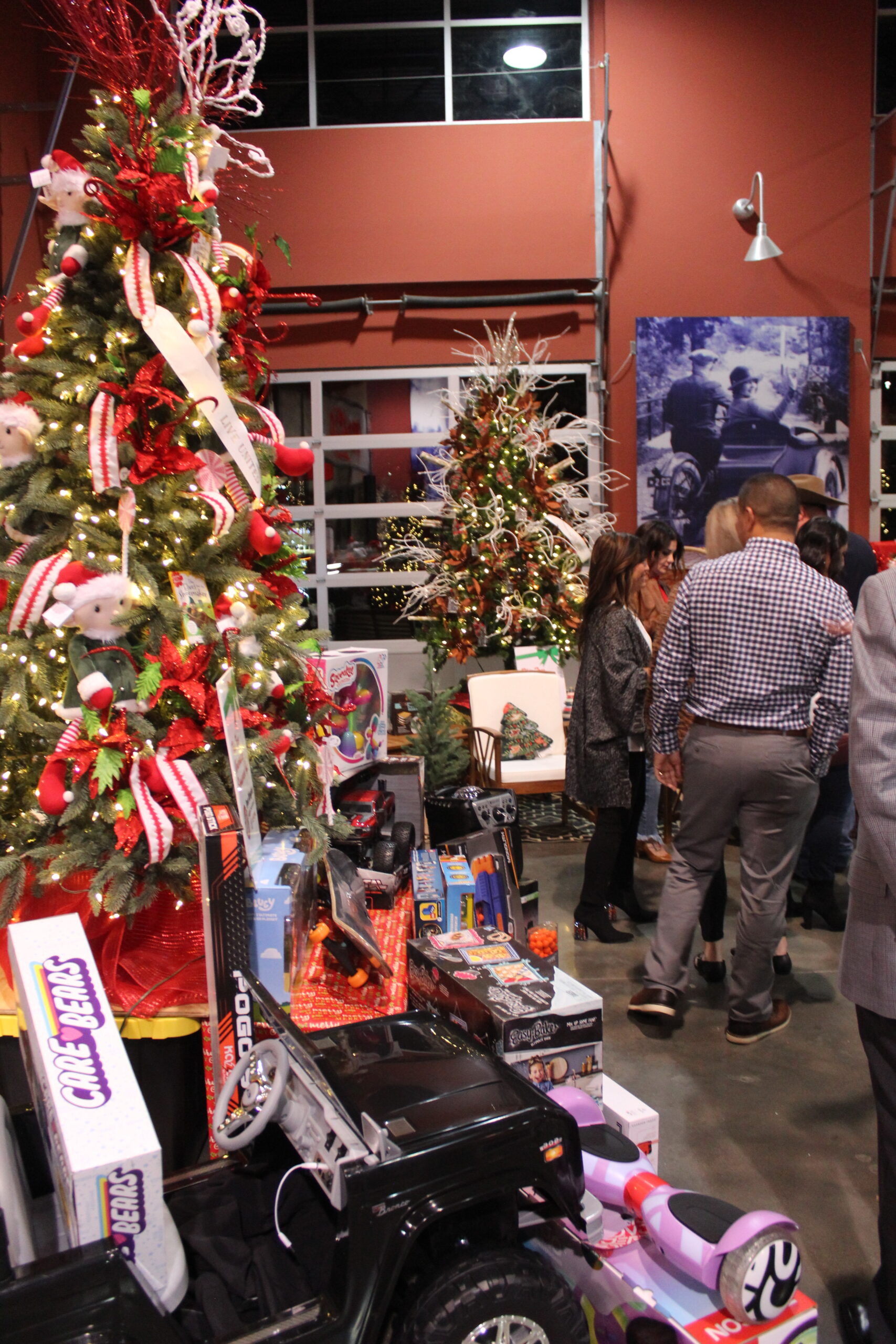 The event serves as the main fundraiser for the United Way of Central Texas each year, with guests purchasing a ticket that includes a catered dinner and the opportunity to purchase raffle tickets for a change to win a decorated Christmas tree and the more than $1,000 worth of gifts beneath it.

The Board of Directors’ tree featured blue and silver ornaments and decorations and also included a three-night stay in a modern one-bedroom apartment at the winner’s choice of locations. This item sold for $3,000.

The other live auction packages included a home office makeover, including a one of a kind antique wooden desk and other items for an office makeover, donated by Alan B. Stevens, Ph.D, which sold for $1,700; a private movie party, with a 70-seat theater rental and catering for up to 50 guests at Grand Avenue Theater in Belton, which sold for $2,000; a dinner package for six with Chef Scott Kenyon, featuring an exclusive four-course customizable menu, donated by H-E-B Plus! Belton and Scott and Meceil Kenyon, which sold for $1,250; and a group travel package that includes a three-night stay for four people in a modern two-bedroom apartment at the winner’s choice of locations, which sold for $3,300.

One of the guests who had won the Wine and Dine raffle tree, sponsored by Wilsonart, decided to donate it back to be auctioned off. This tree featured gift certificates to local restaurants, including a catered dinner party for 10 by 100 x 35 Puerto Rican Cuisine, valued at $1,000, as well as an air fryer, a cocktail mixer set, a griddle, a steel ice bucket, wine glasses and more. This tree sold for $2,800 during the live auction.

Kara Cloud, a sales executive with KCEN TV, won the raffle for the Santa Paws tree, and ended up donating the Santa Paws tree back to the United Way of Central Texas to be raffled off towards the end of the event. The tree and all of its goodies went for $900.

Cloud said that the Santa Paws tree was one of three trees she had spent her raffle tickets on. This year was her second year attending the Chrome and Carols Festival of Trees, she added.

“It means everything to us,” Cloud said about attending the event and supporting the United Way of Central Texas. “That’s why we’re here, to give back to the community and to help the United Way.”

Jill said she purchased 200 tickets and had spent 25 tickets on the Garage Tree. She said it was a perfect match because her husband is a carpenter. This was their second year attending the Chrome and Carols Festival of Trees.

Veshell Greene, Vice President of United Way of Central Texas, said that this year’s event had the largest number of trees available to be raffled off in the event’s history. There were also more live auction items this year than in previous years, with the two live auction trees plus four other live auction packages and 10 silent auction packages.

“This is our one and only fundraiser for United Way,” Greene said. “We just really depend on the people and the community to help us kind of offset the costs.”

Greene said that the goal of the United Way of Central Texas is to fight for the health, education and financial stability of everyone in the community.

Some of the different programs and initiatives include the United Way of Central Texas 2-1-1 Helpline, which is free and confidential, and available 24 hours, seven days a week. This helpline is staffed by trained specialists who work to find answers for the callers using a comprehensive social services database.

During the of October 2021, the helpline took 5,197 calls, compared to 10,920 calls in October 2020, from callers within Bell, Coryell, Hamilton, Lampasas, Milam, Mills and San Saba Counties.

The money raised at the Chromes and Carols Festival of Trees will go right back into the community through the various programs offered by the United Way of Central Texas.

“It is amazing,” Greene said about the sold-out event and large crowd of supporters. “People are so excited about meeting in person and so, you know, we were a little bit leery about having an in-person event. They took away all that anxiety and angst, and they showed up and the community is ready to support this event. They’re ready to support the United Way, and here we are.”

Guests purchased raffle tickets at $1 per ticket or $50 for 70 tickets or $100 for 200 tickets, digitally, and then submitted their tickets online at whichever raffle tree they wanted to try to win.

Greene added that this year’s event had sold out before the event started. There were 47 tables, with 10 people per table. Tickets for in person attendance were $55 per person, while those who were unable to attend could still participate in the silent auction and tree raffles by purchasing an online buying ticket at $20 per person.

The total amount raised at this year’s Chrome and Carols Festival of Trees was not available as of press time, but the live auction portion of the event raised a total of $17,950.

Volunteers at this year’s event were from the United States Army, Altrusa International Inc. Temple and the Ralph Wilson Youth Club.